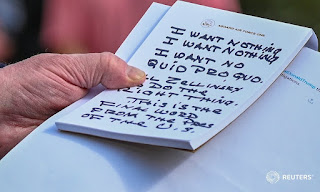 That's how far I had to go back to find a political post. I'm kind of proud of myself.

I probably should have a better one today, but I'm 90% sure I do not.

Have you been watching the "impeachment" hearings? I have not. I barely glance at the headlines, let alone delve into the actual articles. Watching the news is a non-starter for me.

I hopeful, but wary. And weary.

Of course, this is only the House shit. Should it make it to the Senate, it will take every democrat and I think 3-4 republicans to vote for impeachment.  I'm not sure they have the spine, let alone the stones, to do that.

A lot of the press and Facebook seem to think impeachment is in the bag. I am not of that mindset, though I have little to back it up. Again: avoiding news.

Still what I can piece together is the "explosive" witness, Sondland, who has changed his story since his first appearance in early October. In theory, he should be credible to neither side at this point.  Yet the word "bombshells" are in many a news feed. Can anyone confirm if this to be actually true vs. wants to be true?

Politics being politics, why would you believe any of it?  I mean, I certainly can't believe a syllable that comes out of BLOTUS' mouth, even if written out for him in thick Sharpie. Ditto with Graham and Jordan.

But while people I know see damning everything, I see a lot of questionable behaviour and little else. I mean, it SUCKS to be Rudy G right now, but like I said months ago: "if you're gonna hit the king, you'd better kill the king".

Right now, that's not happening.  I'm still waiting and semi-seeing, and not hearing.

Song by: Robert Plant & Alison Krauss
Posted by Blobby at 12:07 AM

it's all a fucking mess. don't know how it's going to finalize.