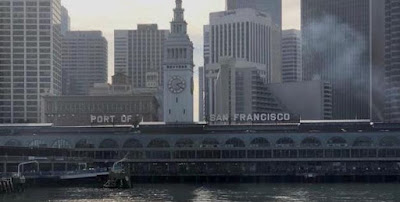 We are back from vaca.

It was not quite the one we had planned, but.......we are nothing if not adaptable.

The plan was for part city, part Sonoma. But those pesky fires that devastated everything and everyone in its path, we had to change gears.

Besides nothing left to see up there, any hotel rooms needed to be used for those who lost their houses - the ones who needed beds.

I will probably break this into two posts - maybe consecutive, maybe not.

With plans changed / dashed, we ended up not having any set plan. It turns out we'd spend three days in the city, two and a half in Monterey and the last day back in San Fran.

Each of the three days we walked not less than 16 miles. I mean, it's great and all, but we're not gluttons. There were times we just hopped an Uber if we'd gone too far and nowhere in sight of a MUNI. 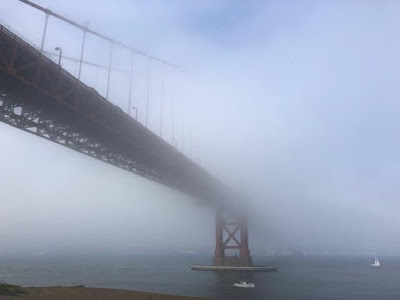 Our first day was beautiful. Until we got about a quarter mile from the bridge. THE one. The Golden one.  But Karl the Fog rolled in......and stayed.  We stuck around for about 90 minutes, but he was going nowhere.

So we walked partially back and hopped an Uber.

.......and did one of my items: the Contemporary Jewish Museum. which was designed by Daniel Libeskind. It was actually a nice visit. 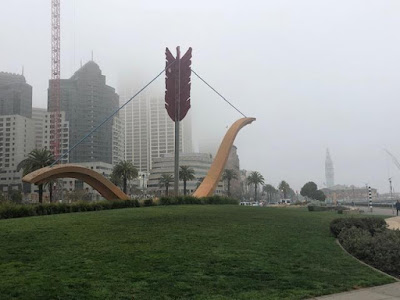 Stumbled across a Claes Oldenburg piece. I'm a fan of his work and knew / assumed it was his as soon as I spotted it. 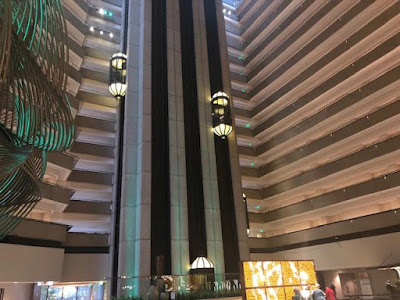 I'd say we went into the Hyatt to see where they filmed some of High Anxiety - and you must remember the elevator scene(s), right?  - but honestly, I went in there to poop.

We ended up walking to the DeYoung museum in Golden Gate Park. It was a l-o-n-g walk, but ate at some great little place along the way. 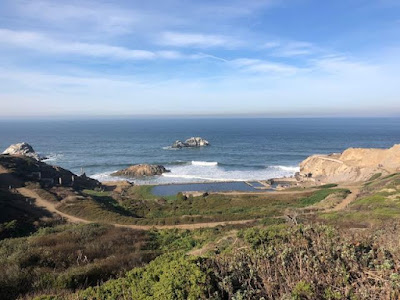 The next day it was out to Lands End and the Sutro Baths. Beautiful hiking along the bay. The hike from Lands End to Baker Beach to the bridge....... 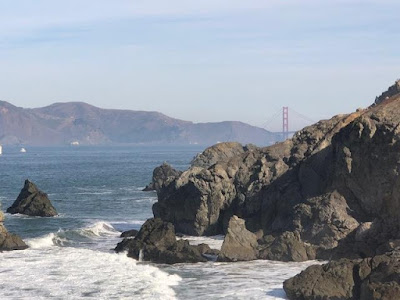 And then an Uber to Sausalito for lunch - and a ferry ride back.  And on the walk back we hit the SF Modern Art Museum.

I seem to have a love-hate relationship with the city. Of course, parts are beautiful, and honestly I marvel at the Golden Gate Bridge - even after all this time. The arts and the independent places to eat. YES!

It is the abject poverty there that is rampant that just digs into those above things. The streets in lots of places just reek of urine. Poverty and homelessness are one thing (well, two), but it is the mental illness that accompanies that which makes it so much tougher - for them more than residents or visitors.

We stopped a few times to even see if the person lying in the road was alive. The only thing more disconcerting was that no one else did.  NO. ONE.   We didn't stop for everyone camped out, but these weren't camp-outs in the normal way.

Then there was the guy punching himself........hard!  Or the guy with his pants around his ankles, no shirt and dancing around (?), struggling (?).  I'd say 'off his meds', but doubtful he had taken any ever.

Apple is pledging $2.5 billion (with a B) to combat the housing crisis affecting the homeless. Good for them, but this goes beyond having no roof. This incorporates mental health, violence, substance abuse and a plethora of other things.  I'm all for them doing what it takes to better the situation, and it's fucking sad when you don't know if $2.5 billion (with a B) will or can even scratch the surface.

That all said, we still enjoyed our time there. Clearly, we wandered, not always with a destination, but that is what kind of makes it fun for us.  And the weather, save Karl, couldn't have been nicer. Sunny (mostly), high 40s as the low, mid 60s as the high.

I'm sure we did other things, though none are popping to mind. It had been maybe 15 years since we've been to the city. We liked it, though probably won't rush back anytime real soon.

tragic that such a beautiful city has gotten that bad.

I grew up not too far from San Francisco and went to college there and it remains my favorite city on Earth.
Even with its issues, it's a gorgeous city.

Great post. We have turned into a twisted version of Blade Runner here in the Bay Area. Even Dickens would be horrified by the contrasts. Only the good weather makes it worth living here. That said you did quite a lot and the forced march to the De Young, WOW even locals don't do that.

Again, I wish you would have announced your were planning to come visit. I would have offered a hometown perspective on things (and a very comfortable guest suite for you and 710)!

That said, yes, it is the best of times and the worst of times here. Having been here since 1996 I've seen the city change quite dramatically. At times, it's heartbreaking. Other times, I have hope that it will rise above its problems. Time will tell.

And of course nobody wants to talk about how "Saint Ronnie" decimated the mental health programs as governor and they were never reestablished.