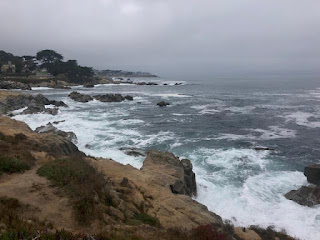 I haven't forgotten about part 2 of our vacation "adventure".

Since Sonoma was closed for business - more or less - we headed south, down Scenic Highway 1, which wasn't so scenic due to dense fog.  Destination: Monterey.

We stopped at numerous places along the drive, just to see what we could see.

We didn't hit clear skies until Pescadaro, which is maybe the half way mark.  But it was a nice view. 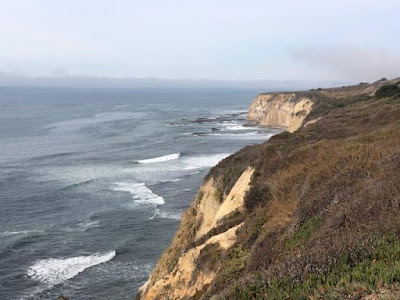 We had been to Monterey once - as a couple - and I had been several times on my own, staying there while working in California.  My client was outside of Monterey, but nowhere there had lodging. So my take of the city was a place to eat and rest my head.

Our one trip together, we ended up there overnight and it was unspectacular. Monterey off-season on a Monday night does not scream 'wonderful'.  It does have an amusing anecdote of eating in a sports bar that had live entertainment - a man with a guitar who STARTED his set with "the Wreck of the Edmund Fitzgerald".  Anything after that had to be considered "up".  Honestly, I couldn't stop laughing during the entire song.

This time, as we were there in mid-November, it is considered off-season. Hotel rooms - nice ones - were plentiful and not nearly expensive. And ours had a great view of the bay. This was our sunrise. 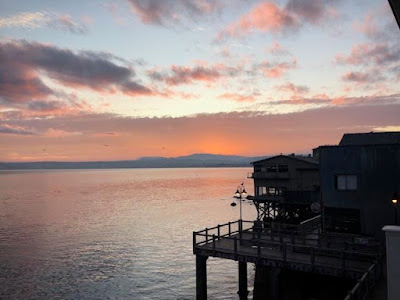 Most restaurants were open and many past 22:00.  Don't laugh, last time, they weren't.

We had good meals and not horribly over-priced. We hiked a ton - mostly just along the shore. Paved, as 'beach' isn't exactly a beach, or welcoming. 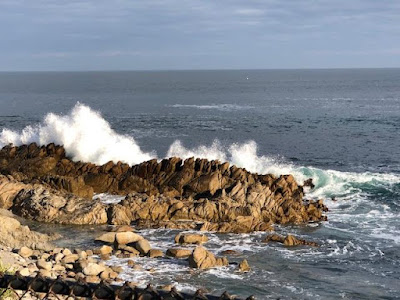 It is, however, beautiful.

I'd like to say we did something "exciting", but I think that is the antithesis of Monterey.  I suppose one could play golf, but one did not. Nor is that exciting either. We were happy to walk everywhere, and as you read, we did see a movie.

During high season, it would be hours to get into their aquarium, one of the most noted in the world. So much so, that Star Trek IV was partially filmed there. I'm not sure that's the win you think it is.

Yes, I'm cheap. I get that. But honestly, for the work they do there on conservation and preserving marine life - it is worth every single penny.  And while I am not a fan of aquariums per se,  this place had my attention from start to finish.

Lost of stuff and activities geared from kindergartners on up.  ....so right in my wheelhouse.

I think my images turned out pretty fucking awesome and it still didn't capture everything.  I'm not going to try to explain everything.  Just appreciate the pics. 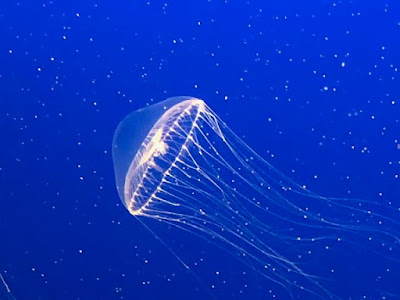 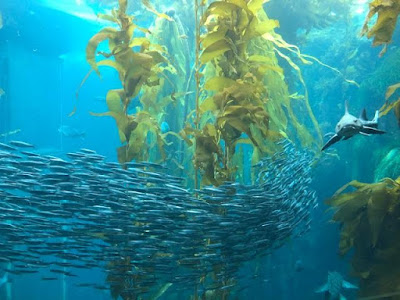 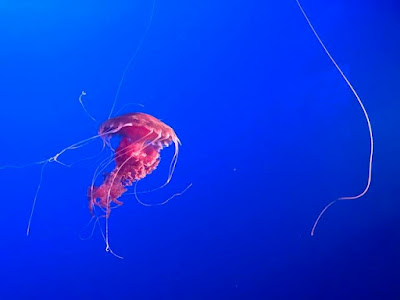 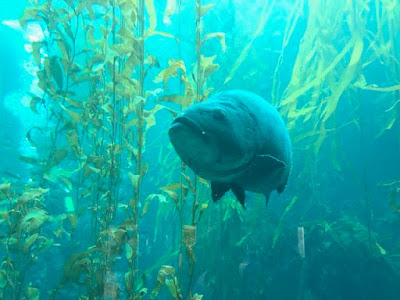 
one of the items, I'm assuming was for the kids. I used to be someone's kid.


Song by: Rosanne Cash & Bruce Springsteen
Posted by Blobby at 12:07 AM

I made that drive a couple of years ago in March, it is a really amazing stretch of coastline.

Just so you know, if you find yourself driving south on Highway 1 from SF again sometime in the warmer months, there is a clothing optional beach just a few miles north of Pescadero. It's immediately north of San Gregorio State Beach.