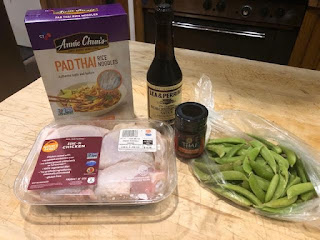 Baking aside, it's been forever since I've done a cooking post. There just hasn't been time in our lives to do anything but some of our standard meals.

But Jamie Oliver - lisp and all - has a new PBS show out that I've taken to watching in the evenings. The premise is no more than five ingredients - not including salt, pepper, olive oil, etc.  Most of the things have not interested me to try, but he had one - sweet and sour chicken with noodles -  I though, 'huh............that's not bad and it seems easy enough'.

In theory, it was easy, but the prep is a little time consuming. Cooking times seems much shorter.

A few caveats:  we had more chicken than was called for, and I knew if I didn't cook it all at once, I'd let it languish. I could have kept the extra out of dish, but I didn't, so I had to compensate with more noodles and sauce.  I'm not sure if that helped.   Oh - and Jamie does stuff in metric, so.....conversions were fun.  But.......here we go. 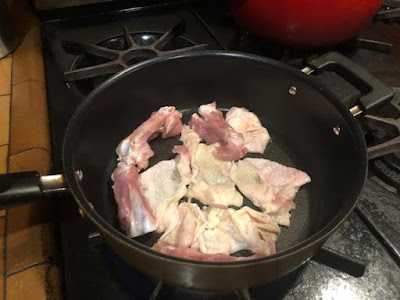 Pull the skin off the chicken. Place the skin in a large non-stick frying pan on a medium heat to render and get golden, turning occasionally. Cut the bones out of the thighs and chuck into the pan for bonus flavour, then chop the meat into 2cm (3/4") pieces. 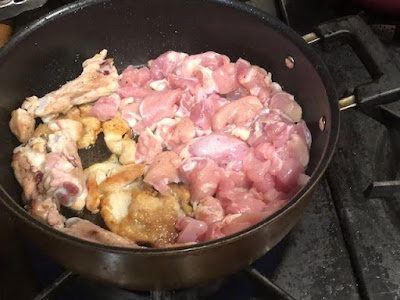 Move the skin and bones to one side of the pan, then add the meat alongside and cook for 5 minutes, or until golden, stirring occasionally. 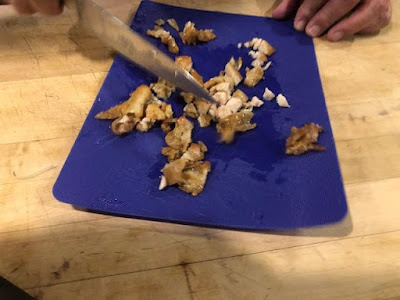 Once crispy, remove, chop and reserve the skin, discarding the bones. 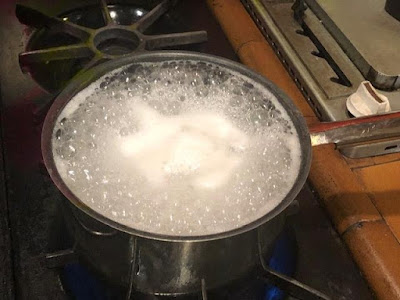 Meanwhile, cook the noodles in boiling salted water according to the packet instructions. 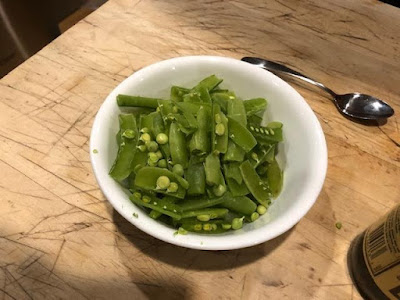 Once soft, drain the noodles, reserving a mugful of cooking water, then refresh under cold water. Use scissors to snip the noodles into roughly 8cm  (3") lengths. 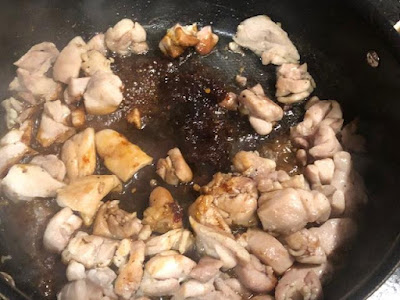 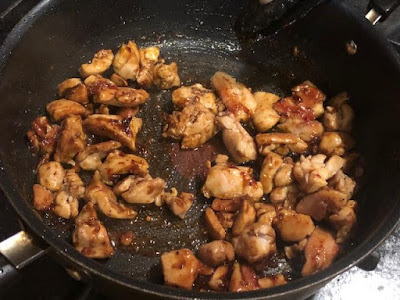 Stir the Worcestershire sauce and chilli jam into the chicken pan and let the jam melt, then add the sugar snaps and noodles. 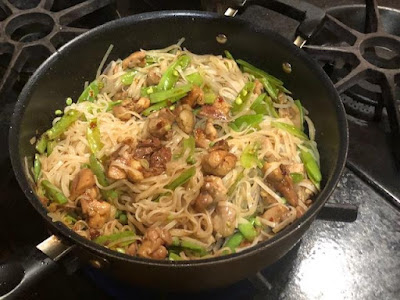 Toss over the heat for 2 minutes, adding a splash of reserved noodle water to loosen, if needed. Taste and season with sea salt and black pepper, then dish up and sprinkle over the reserved crispy chicken skin.


It was.........ok.  The left overs, heated up the next day for lunch tasted better.  A few things I learned, as I can see making again with some variations.

You use no oil, as the rendered skin is the oil you use. The skin put out a LOT of oil.  Jamie doesn't say to drain it or not, but we did. I think that was a mistake. I would take some off, but after the noodles are added, they'd soak in some of that flavour.

Two (!) stores didn't have the vermicelli noodles, so we ended up with pad thai ones. They were ok, but I think the vermicelli would have been better.  I rarely use salt for things, but I would have used more for seasoning.

I'd also have make the skin crispier before taking it out. It was ok but not crisp-crisp.  But it is essential to use on top. It honestly made the dish. ....including the leftovers.

As fair as it was, it has potential, but it was not sweet nor sour, so I am not sure where he's getting that name.
Posted by Blobby at 12:07 AM

I love Jamie's show,and we've tried a few of his meals and they've turned out pretty good.

Less can be more.

I enjoy your cooking posts; I am not a good cook and your dishes inspire me to try things.