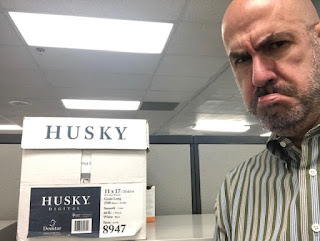 This box sits on a cabinet right outside my office window - mocking me.  Every. Single. Day.

Thanks box of paper - tell me something I DON'T know!

Actually, truth be told, I'm a little less husky than I was six weeks ago.

You might remember at the beginning of October I mentioned of making some changes to my eating habits - at least for the past six weeks.

No desserts, less sugar, less bread.  That was my commitment to the process.  So far; so good.

In a six week time frame, I have lost 9.9 lbs.  Probably 10, as after I weighed myself a few days back, then I went and used the restroom. That had to be at least one once.

It isn't just the non-eating doing this, of course. I have a semi-exercise system.  Not a gym - as my shoulder is still ever so troublesome.

I also make the effort in stairs. As I walk through the building, and take a set of stairs, as long as no one is in the stairwell with me, I will walk up and down the steps 3-4 times.  I'm currently averaging about 22 flights of stairs per day.  No less than 10. Sometimes upwards of 37.

My snacks are bananas, pistachios and clementines.  If I need sugar (at work) I have one Jolly Rancher.  It's all of 3 calories. At home, it's been no white sugar.  I'm not trying to deprive myself completely, but I knew I had to start strong, so............here we are.

10 pounds isn't everything, but I think at 1.66 lbs per weeks is healthy.  It's not the big drop all at once, but I am not sure that is sustainable in keeping off anyways.  And I mean, per week, that's like 86 pounds per year - not that I'm looking to drop that much.

The crazy thing about this "diet" is change in behaviours.  No dessert?  I go to bed earlier, though I don't really get much more sleep. JP would die to know I wake up even earlier.  Our milk buying / consumption is way down.  If you don't need a glass to wash down a cupcake, then, you don't buy as much. This also has thrown our dish washing cycle off completely.

You don't even want to know how it's changed my very "personal daily schedule".......but all for the better, so there's that.

I know the original goal was until the end of October, and we made it. But for the time being, we'll keep going. I still have a little more to go, which might take us till the end of the year.

This might not be a temporary change of life, maybe an alteration.  It's a wait and see game. And clearly, a weight and see game as well.

Get up earlier??? I’m surprised you bother going to bed!
I am in awe of your weight loss... “oh Guido, pass the donuts would you?” Keep up the good work.
JP

You are doing amazingly well and on a very sensible regime to lose the weight without feeling too deprived! Good job.

Good on you.
Slow and steady wins the race.

Many years ago I was overweight and started walking to lose weight. As the pounds came off and people noticed, they began asking the obvious questions.
And so, whenever someone said yo me,'What your goal,' I'd say I wanted to get back to my original weight:
Eight pounds,three ounces.