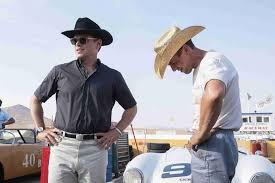 I'll give it this - Matt Damon and Christian Bales do outstanding work. But I really have yet to see Bales do bad work. Some of his movies might be A quality, but it's usually not due to his performance.

My cousins Billy, David and I have an on-going text conversation and this came up last week. 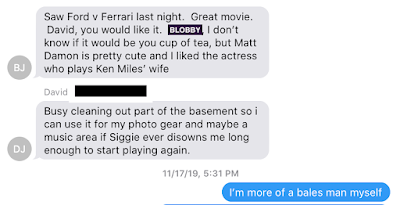 It is true. I am more of a Bales guy.  Truth be told, had Billy told me Jon Bernthal was in the movie I'd have changed my answer pronto. He surpasses Bales by leaps and bounds.

The story revolves around Ford wanting to have a more sporting image and fails to make a bid for the bankrupt Ferrari.  Ego pushes Henry Ford II to engage Carroll Shelby (Damon, who also played a Carol in 30 Rock) to create a race car for Ford.

Going by the title and the one preview we saw, I assumed Damon would play Shelby and Bales' character would work for Ferrari. This is not the case. They are on the same team.  .......not the same way I want myself and Jon Bernthal to be on the same team.......if you know what I mean.

While I can't say I have any affection for car racing, at least the filmmaker made it all tolerable and interesting. As it turns out, I have a friend who is currently president of Shelby American.  Never have I met someone whose passion turned into his work more perfectly than Garry. So, it was kind of fun to see the origins of the company he would once helm.

Ford v Ferrari was well done. I don't know about awards season - which is what I think every studio is gunning for when they release a picture in Q4 of any giving year.  As 'best actors', the two leads might cancel each other out. The guy who plays Ford might get a supporting nod.......as people has won with far less screen time.

Despite exceptional reviews here too (film called 'Le Mans 66' here) I can't overcome my feelings of utter boredom at the thought of car-racing - and yes, I know that the film deals more with characters rather than the actual 'sport'. I do also think Christian Bale a remarkable actor. But even so...... - However, your opinion is starting to make me think again - just thinking.

I remember us eating his chili mix to make chili frito pie in Houston with Becca and Tom W.

Morty - LOLL. Those names together didn't even cross my mind. HILARIOUS.