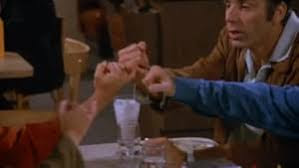 Sometimes it all comes back to Seinfeld.

That show about 'nothing' that somehow is something when it comes to occurrences you encounter.

I have no songs with the word 'contest' in it, but I'm hedging my bets you've all seen the Seinfeld episode called, "the Contest".

Someone didn't get the normal Movember memo - about growing a moustache, which somehow equates to men's health.  I have a moustache, attached to a beard, so that's not happening.

But neither is this next November movement:  No Nut November.

Like 'the Contest' the short description is fairly short:  no getting off.......all month. 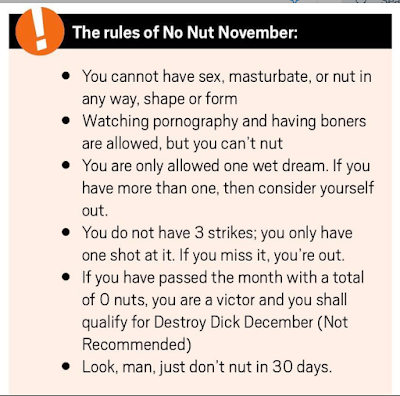 Truth be told, days ago, when drafting this, I was winning this contest. Crushing it, in fact.

But that was days - or two weeks ago. Yes, I'm pre-drafting / publishing some posts.  So, it's possible I'm still winning........though most of you would say I'm "losing".

Clearly, this is a millennial's doing.  I'm fifty fucking six years old. Should the opportunity for sex come my way, (yes, I just said that), contest or no contest, I'm taking my shot (yes, I said that too).

Song by: Christine McVie
Posted by Blobby at 12:07 AM

Email ThisBlogThis!Share to TwitterShare to FacebookShare to Pinterest
Labels: Contest