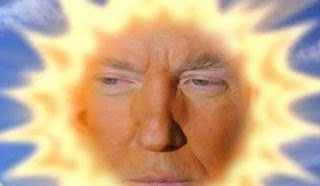 Everyone is so atwitter about BLOTUS making Florida his primary residence,

As much time as he spends playing golf there, it's clearly DC isn't primary.

It doesn't seem to be a preemptive move for divorce after his term in office. It looks like New York and Florida have similar no-fault laws on the books.  Neither state has equal distribution of assets, but the court decides 'fair'.

Taxes?  As the governor of New York aptly tweeted: 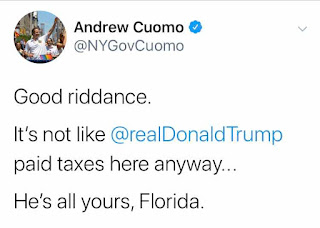 What I haven't seen, though I haven't really bothered going back first or second paragraphs.

But honestly, what I haven't seen anyone touch on (though read that previous sentence again), is this:

Florida has some of the most broadly worded protections available to debtors wishing to shelter their assets from creditor attachment. With these protections, BLOTUS and others facing pressure from creditors, often move to Florida to ensure their assets are judgment proof.

This is reason that the BLOTUS and OJ Simpson's of the world, head to g-d's waiting room.

I mean, ask Ron Goldman's family - and their non-received payment from felon Orenthal James Simpson, to the tune of $33.5 million big ones.  OJ wasn't a resident, but you know........when one must protect their assets from legitimate legal settlements one "moves" to America's wang.

This turd of a president knows once he leaves office and any protections the office held (if they actually do now), will be gone.  Again, he's a fucking evil man, but I don't equate that with being stupid........regardless of the people he pick with which to surround him.