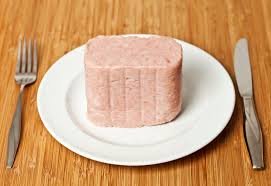 At those times, I have good reason, though I don't always know or remember what they are.

My place of employment is horrible with our cell reception. It's annoying for employees for sure, but I think of the patient and family populations who are trying to relay information and fine tons of dead zones.

So somehow I'm being penalized for not having a wife and two kids, all of whom need phones. I think I should be rewarded for not.

As much as I hate Wal*Mart, that service I got my mother - unlimited phone and data - for $35/mo sounds good. I have no idea of their coverage though.

That said - I got a text message from AT&T (for which they didn't charge against my plan!) and said they were enacting a spam control starting.............now!

And honest to Yahweh, the next call came up: 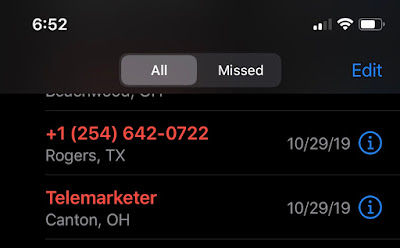 Well, the next call was the second one.  The one above it?  Probably Rachel from Card Services. As I don't know anyone in Texas, let alone Rogers, TX - if it even exists.

But over the course of last week, I haven't seen 'Telemarketer' come across again.  Now it's..... 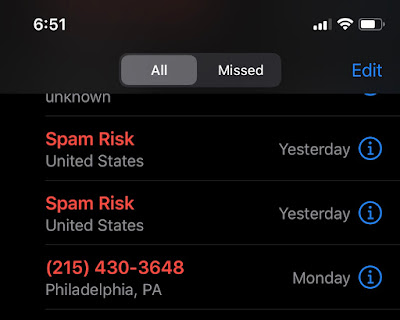 I don't care that I left the Philly number there.  They're trying to get me to pay off my non-existent student loans.  So clearly, this isn't catching every call.

Mind you - with my mother now gone I rarely answer any call from a number that's not already in my phone. With her alive, it was a crap shoot that it was something I needed or someone needed me.  So that Philly number left a v-e-r-y long and detailed voicemail.

710, who does have Verizon, says he has not seen this as an option with his service, let alone one where the carrier reached out the customer to enact.  I do have 'opt out' options, but why the fuck would I want to?

So AT&T, you may have just bought yourself some time with my decision making.

Email ThisBlogThis!Share to TwitterShare to FacebookShare to Pinterest
Labels: iPhone

I have a dumb phone (as opposed to a smart phone) and I do not answer any number that is not already programmed into it. I have a verizon prepay plan, $10/month. the flip phone is used for emergencies only.

The new IOS *does* have an option to silence unknown callers: it sends everything to voicemail unless that number is in your contacts list. I love it.