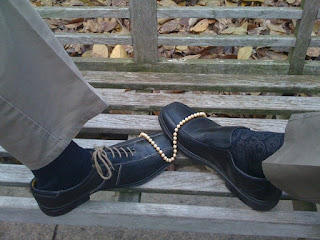 It's hard to believe that it was seven years ago today that 710 and I got married.

It was a beautiful day back in 2010. Not so much today. It's going to be colder now than it was then.

I don't know that I would want to get hitched in DC currently. I could not stand equating my happiness and a great moment in my life with the scum that is currently residing within the city limits.

Anyway - we kind of  / sort of have plans for our day. We hate leaving Shep during the weekend, which explains our movie totals sinking to the bottom of the ocean this year. And I can count on one hand how many times we have been out to dinner since he came into our lives.

I'm not complaining. Not a bit. Cooking and hanging at home with him has been great for us....and him.

However, knowing we might need a reason to go out, the anniversary is a great rationale. This morning I'm taking Shep for a play date at doggie daycare, and then the owner is taking him home to stay at her house for the night. He's gonna have a great time.

We are totally going to take advantage of the sitch.

So time-wise that fucks stuff up. If I eat before the movie, I'm sleeping during the movie, because it will be a 21:30 showing.......and I'll be full.  ...and possibly drunk.  If we eat after the movie, the nicer options are probably out.

I get to spend the anniversary with the man I love, and whatever and wherever that is will be fine.  Though not sitting around the house, as that is not an option.

....btw, the pearls in the title image were our "borrowed", I guess. Eileen Flowers' strand came to us via her daughter, our honour attendant, Becky.  I tried to put them on for a shot, but they became more like a choker.....or a choke-him.  I feared the string would burst and people at the Smithsonian would be scavenging Eileen's jewels.  And that I'd pull a Jack Tripper and slip on one and prat fall before the ceremony.

Song by: Rosanne Cash
Posted by Blobby at 12:05 AM

Congratulations! Happy 7 and 32! I like that many of us gays have two anniversaries: our actual marriage date and the date we became a couple (since we were not allowed to marry). So next year I and the husband will celebrate 6 and 35, about a month apart.

(sings) tell me you're trying to cure a seven year ache

how nice to hear of a couple still in love after 7/32 years. congrats!

and yeah, who the fuck schedules a meeting for late friday afternoon? they should be fired!

Congratulations on your anniversary... and many more.

I respect and applaud the way the two of you are such conscientious, devoted parents to Shep.

Congrats on your 7/32!
Send the dog out for a sleepover?
What exactly are you really planning on doing if even the dog can’t watch?

Happy 7/32 Anniversary! Have a great night!

I join the conga line of congratulations! Bravo!