Save it for Your Prayers 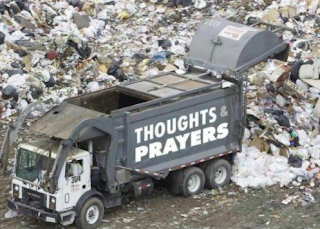 Should I just rehash my posts from Orlando?  North Carolina? Aurora? Sandy Hook?  Vegas? Should I keep going?

Well, I guess for my next gun violence post {at this rate it should be in 17 days or so} , I can add Sutherland Springs to the ever-growing list.

Honestly, I cannot think of a new thing to say.

None of those are new.

Another white dude. Another AR-15, just like all the others.....or most of them. But because they're not brown, it's not terrorism.

Oh wait - I AM repeating myself from the other posts. Sorry.

I will say this about that - I don't hear anyone asking where this guy has been radicalized. And I am waiting for the 'good guy with a gun could have stopped this'.  45 rounds per minute the AR-15. How many people bite it before the 'good guy' gets a round off - assuming he/she wasn't the one taken out i the first place?

It a joke. The entire thing. Yes, including BLOTUS.......because he's such a fucking asshole, calling the shooting "a mental health problem at the highest level."   Said the man who rolled back gun control laws allowing the mentally ill to have access to firearms.

We do have a mental health problem at the highest level.......and it's BLOTUS. Though let's face it, he's hardly the one responsible for all this gun shit. He's had lots and lot and lots of help over the decades.

I should feel worse for all of this. ALL of it. But it's hard to, being that it's all so predictable.

But until someone with an AR-15 goes into Senate or House chambers, I can guarantee you nothing will ever get done.

And  feel free to read through the double-negative:  No, I'm not not advocating someone do that.

I can't help noticing that after one horrific incident the terms 'sick' and 'deranged' (as well as the curious use of 'animal') are being hurled around as insults, the next time the same words are used (by the same person) as an implied plea for understanding and tolerance for those with mental health 'problems'.