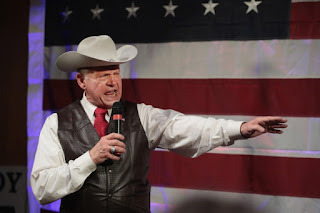 Yes, folks, if you think BLOTUS is the lowest and scariest you can go into U.S. politics, you are incorrect.  You just have to look to the Alabama "judge"* to know how things could be much more more more worse.

I'm not quire sure how he got to be a judge, as he clearly is out of touch with the law. Well, the laws that aren't from biblical times.  ....and even those he's interpreting incorrectly for his own gain.

He could learn a thing from that 'thou shall not covet....'

So, Roy Boy had a thing for teens as an adult. How is this just now being found out? He's been an asshole for years.

Politicians are not like Hollywood. Sure it took tinseltown a long long time to get on board that rape is bad, and sexual harassment isn't a good thing, but they're getting it.  Washington DC?  Not so much. 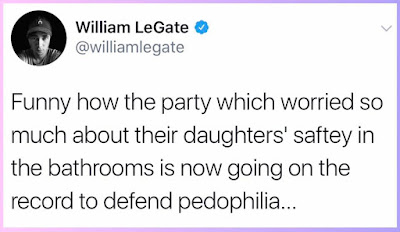 Anthony Weiner sends his first dick pic - more or less - and is out of his political job. He didn't even get with the girls. The GOP is all - oh man, let's just wait and see - and then goes right to victim shaming.

Of course this is the same party that embraced Dennis Hastert, Larry Craig, Newt Gingrich, Mark Foley.......should I keep going?  Once again, they're the party of hypocrisy.

I will give them this - publicly they say they're cutting off the funding for Moore. I'm cynical enough to believe this not to be true, they're just be covert about the entire thing.

Of course, I'd love to see the d-bag go down in flames, but all bets are off. Yes, the Dems had a good week with the 2017 elections, but this isn't just the south - it's Alabama.  Fucking your sister and cousin are standard operating procedure. How much worse can trying to date a 14 year old be?

Still, some in the GOP are truly distancing themselves from Moore. They're pulling back endorsements. Maybe they're seeing him as Harvey Spacey....and don't want to be the collateral damage.

I'm hoping this does not end well for Moore. Because if he's elected, it could all end badly for us.

Song by: the Andrea True Connection
Posted by Blobby at 12:11 AM

you stealing my material? ;-)