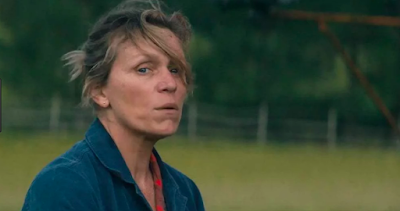 Three Billboards Outside Ebbing, Missouri came out right before Thanksgiving. The plan was to see it Wednesday night, but Tom's funeral kind of got in the way.

Then we were going Friday night, but 710 was exhausted after doing leaves (I can't because my lame hand). So Saturday night it was.

I know I still have a few films to get through for 2017, but I feel fairly safe in saying that Three Billboards will stand at the top of the list.

McDormand was outstanding, which doesn't really surprise. Still, she gave an amazing performance that is totally Oscar worth (.....are you reading this Mike?).

I have to say, between Game Change and this movie, Woody Harrelson might redeem himself in my eyes. I've never thought much of his work, but he's kicked it up a notch or two in the last few years. He had a good performance too.

Sam Rockwell probably has the most range with his role. And Lucas Hedges (yes, whom we saw last week too) is decent and making all the right choices with the roles which he takes. Peter Dinklage does a nice job too.

I won't give specifics about the movie - and there are no spoilers here. I wouldn't call it an "up" movies, but it has enough lighter moments to not make it a downer.

I would suggest you make Three Billboards one of your movie choices for 2017.

Another one I'd not heard of, not opening here for another 6 weeks. It'll definitely be on my 'must-see' list. (Current IMDb rating is 8.5, so it's getting a generous thumbs-up.)