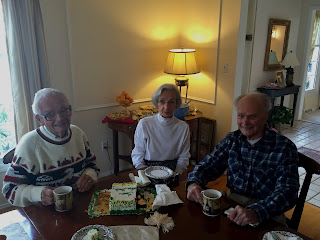 He was three days shy of turning 97, my Uncle Tom was.

According to my cousin Tim, Tom's written instructions went like this, "If I die....."

That would be Tom.

Between my mother and her two brothers, they tallied up to 285+ years of life. I'm rounding up a little as my mother will turn 89 in a month and I tacked on that 3 days for Tom. Clete, on the right, turned 99 in June. His wife is 98.

Yes. I have a long long way to go.

Still, not quite unexpectedly, Tom passed away earlier on Monday, services were Wednesday. As funerals go, it went well. As you'd expect, not many friends were left, as he was 97-ish. It was well attended by family. I certainly got to see some second cousins I don't see a lot (my first cousins are now all in their 70s. Their kids are more my age.)

As I escorted my mother out, I noticed a number of elders there. The folks from the assisted living facility made their way down to where the service was held. I don't know if they knew Tom, or if they just go to all of these things when they happen.

For the third time in my life, I was a pall bearer. It was not nearly as jarring of an experience as the first two times. With my lame hand, I had to carry on one side to put the casket in the hearse, but on the opposite side taking him out at the crypt.

Three Navy men were waiting at the cemetery. They did a nice job with Taps and the folding and presenting of the flag to my mother.

Tom's wife died about two decades ago and they had no children. Technically, Clete was closer in age, but he hasn't been notified about his brother's death. There are a lot of logical and practical reasons to this. I do have to say, I think I visibly cringed when the soldier presented the flag "from the United States Navy and from the President of the United States".

I know Tom would have cringed.

Afterwards there was lunch on Tom. He wanted nothing formal in terms of service or remembrance. Tim, did speak at lunch and told stories the younger folks might not have heard. I, however, had heard all these tales many a-time. Some WWII stories. Some of this experiences at the steel mills. How he dropped out of school at 16 and became self-made. I couldn't thank Tim enough for all he did for his uncle in terms of his estate and elder care arrangements.

While not father and son, Tim and Tom had the same initials. One of my earliest memories of Tom was seeing his ring of his initials in diamonds. Not something you see outside of Mr. T or the Sopranos. I laughed at lunch when Tim pulled it out and put it on.  I was hoping he would get it. Tim assured me it was the one and only time he would wear it.  Bling is not his style. I kind of hope he changes his mind.

I know my mother has a sad / glad thing going on. She and Tom were very close. It's been a tough year for her watching his not so slow deterioration. 710 and I saw Tom last in September. We went out to his facility and had lunch with him and spent a few hours with him. It was difficult for him to speak - and the man was a talker! He tried his best and we tried our best to listen and interpret.

To say Tom was a character would be an understatement. He was the most self-assured man I've ever met, but without being obnoxious about it. He was quick. He was funny. He was kind to all - even when he didn't like them.

He will definitely be missed.

Here's a picture of the three siblings taken 27 years ago. 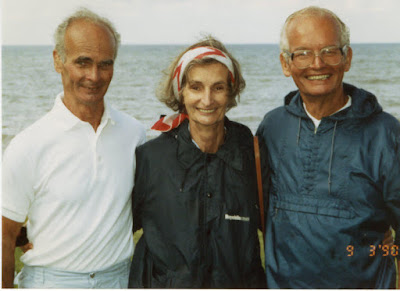 Condolences. A nice tribute. And it's weird to realize that 1990 was 27 years ago. Jeez.

My sympathies to you, B.

condolences to your family. tom sounded like an interesting character with plenty of stories to tell.

that was a loving tribute; thank you for sharing it.