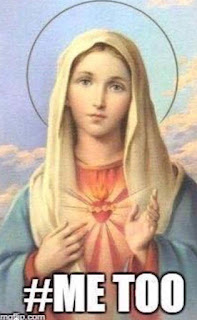 Clearly, what Harvey Weinstein did was reprehensible.

I don't think anyone thinks he's misunderstood or anything. He's just a dick.

Still, silver lining and all.

Unlike the Roger Ailes and Bill O'Reilly "scandals", Weinstein has set off a firestorm of people not putting up with this shit of being fondled, harassed or you know.....raped.

So while very few people would admit to being sexed up by Ailes (or O'Reilly) they sure like to talk Harv. And clearly, a number of the Fox folks got way way way better pay-outs than the chance to be an extra in straight-to-video Miramax film.  O'Reilly's  last one was $32 MM.  Even I might keep my trap shut for that amount of cash.

Still, the balance has shifted these last weeks. Everyone is talking without as much fear of repercussion.

I'd say, "oh, poor Kevin Spacey", but I think he's about to get what he deserves........the shunning of a lifetime.  Now eight additional guys are flapping their gums about Kevin's not 30 years ago shenanigans. More like 30 days to 30 months ago. He'd have a hard time claiming failure to recollect that many and that recent.

I see regional productions of Streetcar at the Bonnie Franklin Dinner Theater in his future. I'd say in his "very near future", but you know, he's "seeking treatment".

I'm curious how this all turns out.  Not so much about Spacey - but culture. You know the piggy predators are still out there. You gotta believe that many of them are sweating. Many more think they're untouchable and it will be business as usual, but I'm not so sure it will be. And it shouldn't be.

Song by: Rhonda Vincent
Posted by Blobby at 12:03 AM

I think the dump dictatorship has something to do with the current outcry.

like the duggar girls, we women back in the day were taught to "lie back and think of england" while our men used and abused us. NO FUCKING MORE!

and yes, the leering pigs are out there and always will be (until they die off). mothers AND fathers need teach their sons to avoid "rape culture" thinking and their daughters to kick guys in the balls and speak out!