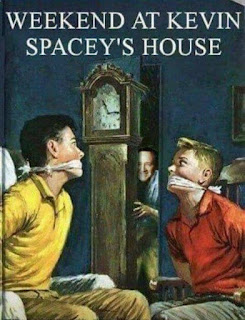 Some woman on Facebook commented - incorrectly, in my opinion - that why is it that someone took immediate action regarding allegations about Kevin Spacey while it took decades for anyone to believe women about Bill Cosby or Harvey Weinstein.

She seemed to imply - well, state, more than imply - that no one believes women, but men's stories are to be trusted.

Mind you, this was in some feed where I got a notification that a friend had commented in the thread. However they have their settings would have allowed me to comment should I chosen to, but I figured no good could come of it. Minds were made up......and to go back to the days of early message boards on the internet, why start a 'flame war'.

I think quite the opposite of Spacey. Yes, Netflix - and now some movie he was in (past tense) - took immediate action. But not because he was a man, or that it was a man who accused him. It is because of these women, their stories, their fight - and the tipping of that first true domino with Weinstein, that the gates are now open.

I said as much last week.

Who runs the world? Girls! They run this mother.

So, Amazon Picture president. Gone.  NBC reporter - shitcanned. Louis CK - you be in trouble. Ditto for you Jeffrey Tambor (sorry George Bluth....I wish it weren't true). Some chef I never heard of - 86'd.  And a few others since Harvey's downfall.

That is major progress, though Cosby is still on the loose.

Cosby aside, I don't know who was actually tattling on Weinstein. For years, McGowan and Olivia Munn told stories of inappropriate behaviour but mentioned no names. I don't know if it was shame, denial or more protective of their would-be careers over their self-esteem or knowing it was and would be happening to others, though they basically remained silent.

It's not victim-shaming. Still, if one is unwilling to name names, especially if it didn't happen to you (I'm looking at you Paltrow, Affleck and Jolie!), then you're complicit at the very least.

Justice was swift for Harvey and Spacey, though it's public opinion, but anything court-related.

I'm not sure there is a comeback in Kev's future. No more House of Cards. Allegedly the 6th season is or was shooting. I'm guessing not anymore - at least with him. A completed movie ready for release in a month (!) is being reshot with no Spacey - and replacing him with Christopher Plummer - 30 years his senior.  Ouch!

I'm guessing that would-be gig at Bonnie Franklin Dinner Theater might now just be for sound-guy or usher.

So no, I don't think it was a male / female thing with the expediency of Spacey's downfall compared to others. Actually, Netflix and that movie company did it for any number of reasons:  limiting their liability was #1.  Saving coin was #2 (but tied in to #1).  And I'm cynical enough to figure they did it for the publicity of being right, and letting everyone know it......and hey, if it helps sell more goods and services, so be it (see #2).

.....and let's face it, while male-female casting couches are standard, 'they' probably want to shut down any dude-on-dude talk. That, is unseemly.  While normally I don't think it is, when you add Spacey to the mix.....it is!

And while you can thank the countless women who have been harassed, fondled and raped for the change in culture, who everyone might want to be thanking currently is Ronan Farrow.

Song by: Van Morrison
Posted by Blobby at 12:03 AM