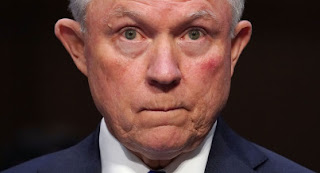 You know, I don't really give a fuck about Hillary Clinton - one way or the other.

A GOP controlled House and Senate and they still can't pass anything for a GOP "President". Put a Dem in the White House  - and a girl at that, especially a Clinton - and you can just tick out your 4-8 years with nothing to show for it.

I voted for Clinton because really, what were my options? But I don't think she's much of a political saviour. The emails were a non-issue, but I have to believe she has skeleton after skeleton in her closets just like every other person who runs for office.

All that said, the DOJ considering investigating the Clinton Foundation is just plain retribution and vindictive....and the joke / sad thing is: you were the "winners".  Now, all you'd be doing it for is spite.

Welllllllllll.......that and - deflection and distraction.

Russia. Wikileaks. Jr. lying about Wikileaks. Sessions lying about Russia. (fill in the blank here......here.......and here for any other moment from which they are trying to move you away.)

I mean, if you're really looking into potentially corrupt foundations, Jeffy, you might want to start with your boss.  That thing - time and time again - has proven to be nothing more than a money laundering business. A the very least I'd say it's nothing but a tax shelter, except for the fact that your boss doesn't actually pay taxes.

Sessions though, it just a turd. What was it: 29 times he "didn't recall" something during testimony? Best case scenario you're memory is going as you slip into dementia.  Worst case - you're lying through your teeth, which is ironic for the head of the Dept of Justice.  ....and let's face it, does any of us think when they say "I don't recall", not not think they're lying?   It's my go-to.

But on the off-chance that Beverly Leslie isn't lying, do you really want an Attorney General who doesn't remember a thing?


We are being governed by a bunch of low-rate mean girls......and stupid ones at that.

and just like benghaaaaaaaaaaaaazi, they will find nothing and waste my tax dollars.

pence da putz wasted $14K of my tax dollars on his little football stunt, and that's just for police protection.

I h8 the guvmint!

I belueve there should be a stupidity tax, and yes that extends to those stupid enough to lie. In fact it increases with each stupid lie.

Investigating Clinton will just cost us more money and waste time. Just like you said, it's a diversion to what is happening with Drumph. I watched the proceedings yesterday and nothing panned out as usual with the Keebler elf. All though every time he lied I saw his ears wiggle vigorously.