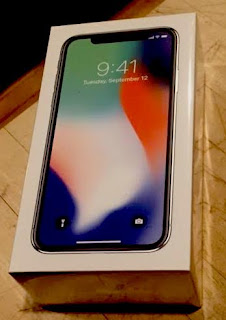 Of course, I was hopeful that I wouldn't have to wait until the second week of December to get the new iPhone X, but I resolved to myself that is what had to be.

That said, I started getting worried. My old fuddy duddy phone wasn't holding a charge. And not for hours, but half-hours. Well, kind of.

A fully charged phone could go to less than 10% power in 30 minutes. Yet if I plugged it into charge, it would almost automatically jump to something like 53%. So I never knew how much power I actually had.

I was also out of space because I never delete anything. Mainly because I'm too lazy, if truth be told. But there's always the 'what if'.

And there was hoop jumping to get the delivery. I'd have to be home to sign. I wasn't willing to e-sign for them to just leave it at the door. Not for this. And you can't have it delivered to a UPS store - go figure - but the UPS distribution center.

Safe to say, yesterday, I saw parts of Cleveland that I never knew existed.

Oddly, 710 got his phone the same day, though earlier, as his was delivered to his office, since it was ordered from his place of employment.

So our wild evening last night was setting up two new iPhones. We are the crazy couple.

I'm so less a tech guy than 710, and I had a way easier time of activating my phone for some reason. Photos, contacts, calendar et al came over without a hitch. I thought music would too, but I didn't. Which isn't a bad thing. I've had basically the same playlist on there for years. It's time to mix it up.

With the old 6, I was a little limited in what I could put on - technically, I could put my entire music liberry on my phone, but that isn't going to happen. Yet, physically moving songs it tedious. I think it will be a few days before I can get that going.

So far the changes have been ok and seem fairly intuitive, but time will tell. I haven't used the new camera yet, but you can be sure you'll be seeing images in the near future.

Song by: Roger McGuinn
Posted by Blobby at 12:03 AM

Congrats. The Better Half Loves his. My 7 is only 11 months old so I’ll be waiting a while. However the series 3 Watch is keeping me happy for now. Odd your music isn’t showing up from the cloud. Last I set up this here 7 no music came over but all of it including playlist showed up on iTunes from the cloud and I could either stream it or pick and choose what I wanted to download and each playlist had the choice for “download all”. Same thing with my movies. I was told it was purposeful to allow user to save space on the device. That and depend more on cloud storage for which I pay Apple monthly.