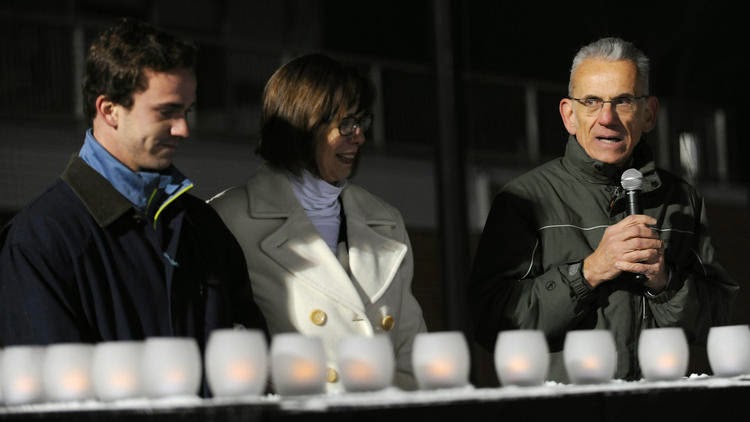 Wow. One-twelfth of the year already gone. How'd that happen?

So far, I'm not a huge fan of 2015. Some good folks I know have had tragedy befallen upon their house. Deaths of children and parents. It has not been auspicious start to the year.

Nancy, who is the female in the image, was my boss years ago. I will argue, she is one of - if not - the smartest person I have ever met.

That she was funny, clever and supportive was just icing on the cake. She has been my biggest and best career mentor.

The unexpected death of her college-aged son must be horrible. I couldn't even truly imagine how she feels. I haven't been able to talk to her - nor would I try at this early of a time - but I got a note off to her and her husband. Not that they're there to receive it. They are at his college, where a nice memorial was held, and Nancy, being Nancy, was nothing but gracious and articulate in the newspaper articles I Goooooogled.

The parent thing, was another friend - also a friend of Nancy's and myself. Both her parents died in a house fire the following day. Another scenario at which I am unequipped to comprehend.  I mean, what a shitty week.

Or I should be able to pay my respects, depending on the arrangements and the weather.

Weather aside - let's hope February turns things around for this year. We still have a ways to go to make it better, but in my estimation is has nowhere to go but up.

Song by: Dar Williams
Posted by Blobby at 12:05 AM