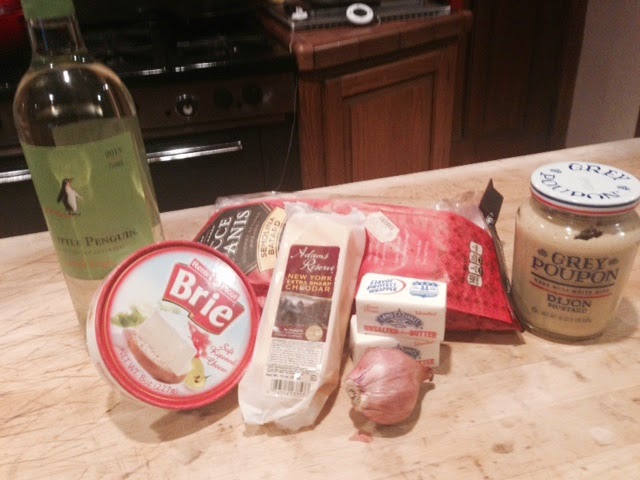 Winter nights are for comfort food.

Sure, I still make pasta dishes, or chicken and peppers on some nights, but that is because they're easy to prep and quick to cook. And it doesn't take a lot of thought. And I can be lazy.

But sometimes you just want something to have a comfort factor to it too.

Mac & Cheese fit that bill. Meatloaf. Stuff like that. The standards.

Then there is grilled cheese and soup.

Last week - though not noted here - I made a grilled cheese a different way. In that, you don't butter the bread, but melt the butter in the pan and put the bread in there. And you use shredded cheese. BUT - once you flip the sandwich, you add / press cheese into the top of the bread......then eventually flip again, so the cheese makes a crust on the bread. Do the same to the other side. It isn't bad at all.

But America's Test Kitchen (or was it Cook's Country?) last year did a show on Grown Up Grilled Cheese. It was actually a taste test of standard grilled cheese and the grown up version. Everyone (at least with clever editing) preferred the latter. So......why not.

I started off making a chicken soup with vegetables and pasta. That was easy enough. The grilled cheese was too.....in a way. The clean up was way worse than anything else. 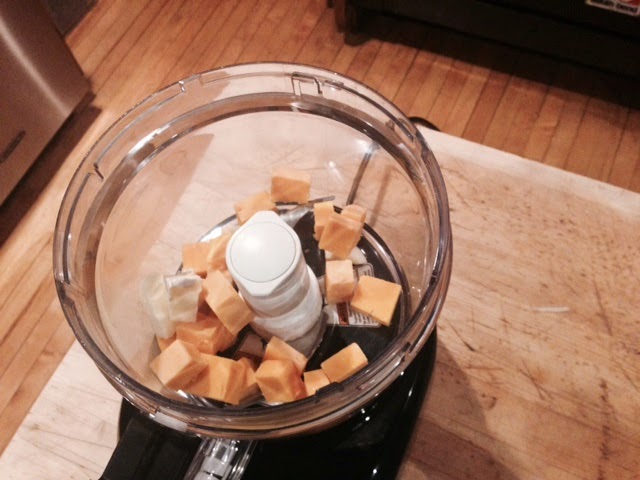 Cube the cheddar cheese into 20-24 pieces. I also quartered the Brie. Add the wine as well. Process for 20-30 seconds.

I know. A food processor to make grilled fucking cheese. This is why clean-up for this dish is a little out of proportion for what you're actually making. 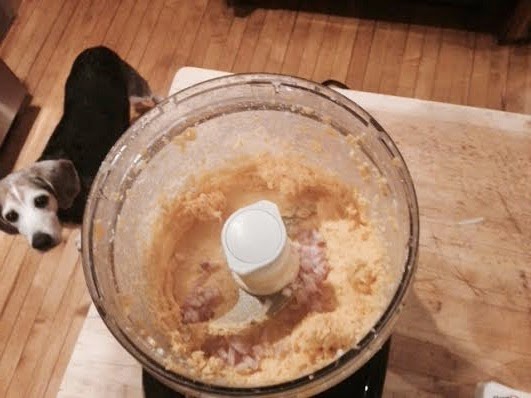 It really makes a cheese paste, basically. Add the shallots, and pulse for 4-5 times.

If you don't have a clean-up crew at the ready, like I do - I suggest getting one. They're happy to lick anything clean. 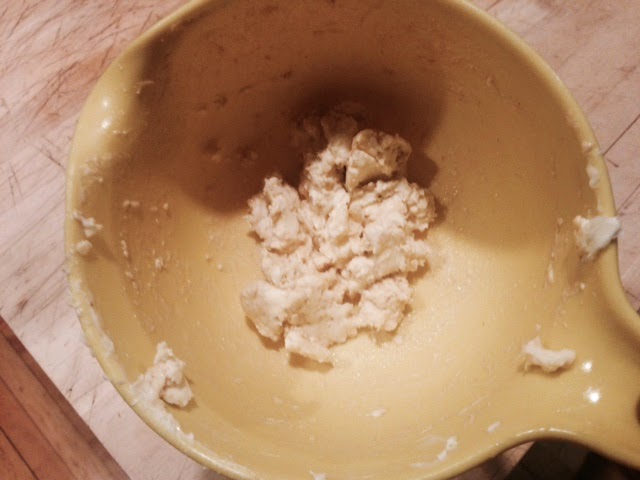 In a separate bowl - mix butter and mustard together. 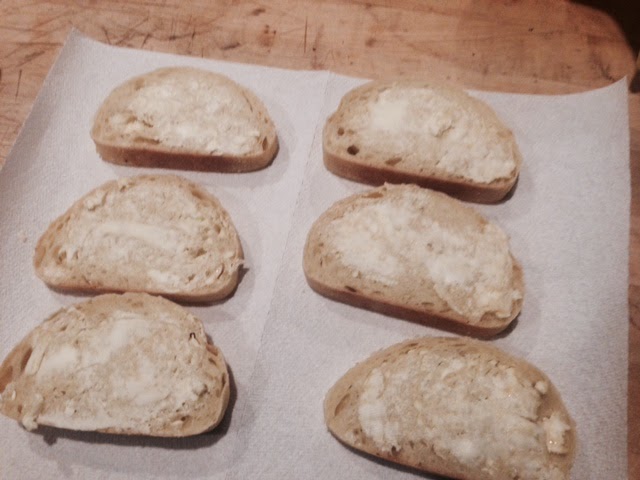 Spread the butter / mustard mixture on the outside of each piece 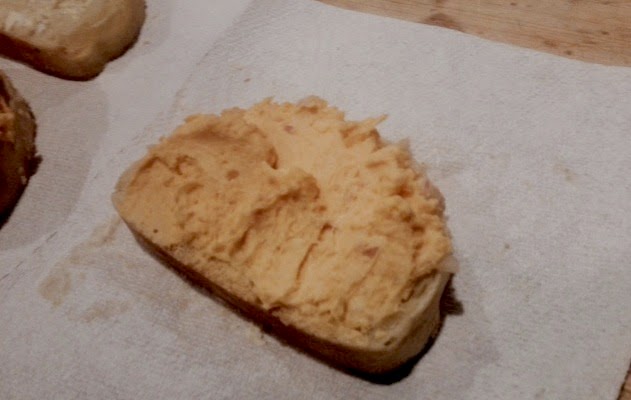 On the inside - put the cheese / shallot / wine mixture. It spreads heavily. You can be generous with this mixture as well. 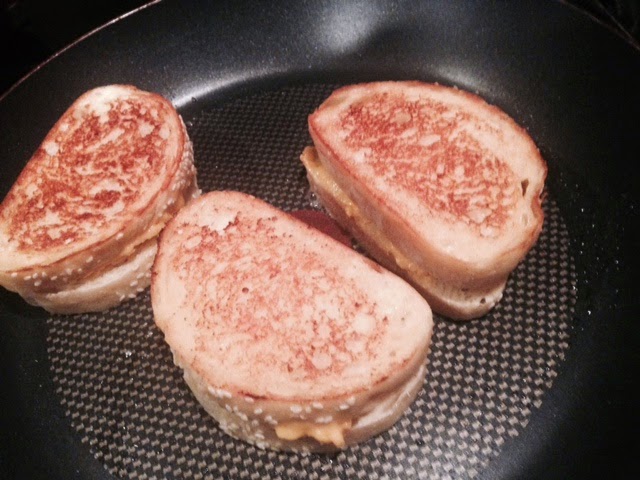 Here is the big difference between regular grilled cheese and adult - patience.

In a preheated non-stick skillet reduce the heat to medium-low and cook each side for 8-9 minutes. Yes. 16-18 minute cook time for frickin' grilled cheese.

Then you have to let it stand two additional minutes. This is important as it helps the cheese set-up a little bit. I forgot on the first sandwich and cut in too soon. 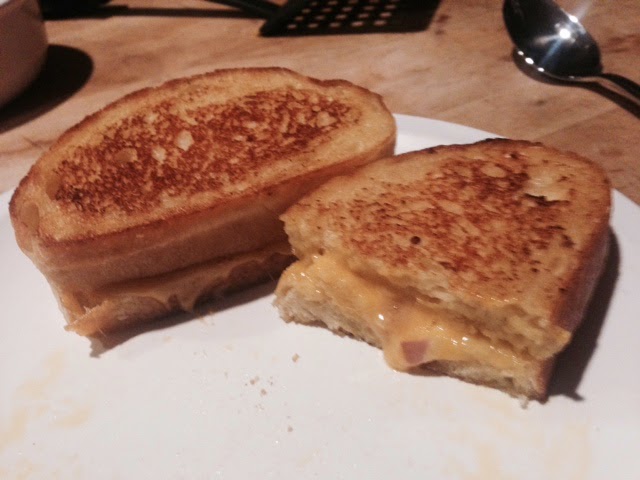 Still - it is kind of worth the wait (though I could have had two and not just one and a half).

The combo for the two cheeses and mustard are great. I really think the wine brightens everything up in the flavour category too. And while it's only two tablespoons, I now have an open bottle of wine that must be consumed. So it is a win-win.


Song by: the Pursuit of Happiness
Posted by Blobby at 12:02 AM

That's a lot of work for a grilled cheese! But I must say it does look delicious!

For me, I'll probably continue with the American cheese between two buttered slices of bread. Ah comfort food.

Good for you! Welcome to adulthood!
Robert

I'm with Robert, though the end result looks delicious.
I guess i could bribe Carlos with a sammich if he does clean-up?

I suppose the beauty is (or could be) w the cheese mixture, you can ready it and refrigerator it and use as needed. The one time mess, can be extended over multiple sandwich making opportunities.

I believe Ina Garten makes a grown up grilled cheese too that sounded incredible and likely was less work. ;-) Kudos to you for doing it tho.

How long is it since I last had a grilled cheese sandwich? Ages I suppose. I forgot how much I liked them.

I like the cheese mix idea. but I refuse to use white bread.