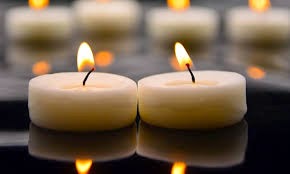 So yesterday I went to calling hours for my friend who lost both of her parents in a house fire last week.

There was to be a memorial at the end of the calling hours, so, I'm almost embarrassed to say, I went early. I know Karen. I don't know her sister, I didn't know her parents. The sad fact is, the memorial would mean nothing to me.

It is possible I would have run into people I know had I hung around, but who wants to hang around a funeral home when you don't know anyone but one of the grieving?

Karen was very happy to see me, and I can't believe she went out of her way to make conversation when she clearly did not have to do so.

While I know Karen is a very strong woman, she was on a new level of strength or just operating with sense of shock.

I've never been to a double one of these. I went having an expectation, but also had that worse case scenario outlier in the back of my head. That was not needed, as it turned out - but as it turns out, I think I'm still creeped out by death.

I think I'm more uncomfortable with my social cues......or lack of them.....in these situations. I could hear the words coming out of my mouth, but not being able to stop them when I said to Karen, "how are you doing?".

I mean, at least it was after the hug and giving her and her sister my condolences, but still.....she would have totally been justified to come back with "how do you think I'm doing?".

Of course, Karen being Karen, she was gracious.

And while it was early, there was still a line of folks forming to talk, so I kept it brief and moved on - and out.

Let's hope I'm done with funeral related visits for a while. I'm not up for this.


Song by: Mary Chapin Carpenter
Posted by Blobby at 12:09 AM

I am not a funeral person. I've been to less than a handful my entire life because most of the people I've known--friends and family--never wanted a funeral, or a casket, or a hole in the ground; they wanted a celebration.
I've told Carlos that if I go first, i want a party with tequila shots and loud music--lots of show-tunes--and laughter.
That's how I wanna be remembered.

I think most people share your feelings about funerals and viewings. My thought is that its best to go (even though you don't want to) because the family appreciates it WAY more than you think. No need to stay long; just show up.

I've often wondered why we, as humans, don't celebrate death. It's just as natural as birth--even though the circumstances of our ceasing to breath may not be natural. Yet we tend to mourn for ourselves, and not celebrate the life of the deceased.