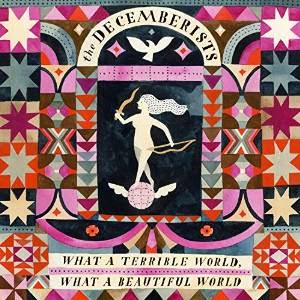 The Decemberists have a new "album". They took a break a bit ago, as multi-instrumentalist Jenny Conlee battled some health issues. But they're back with What a Terrible World, What a Beautiful World (which is really hard to get on the CD case binding, I suppose).

Like with any band or disk - there is good and bad. And with any band that has an ok output of music, you start to see their talent or limits (or both). The problem with the Decemberists seem to be, no matter how much they attempt to stretch, they don't quite seem to sound that much different from their other works. That's not a bad thing for folks who like continuity, but

"The Singer Addresses His Audience".  The music and pace is great. They lyrics? meh.  Like I need songs with product placement (really? Axe shampoo???) or talking about someone copying their drummer's hair style. Yes, I get it is a piece on criticism but save it for your Rolling Stone interview.

I wasn't sure what to think about the intro to "Calvary Captain", but then it took off and it seemed to work, with a '60s vibe, though I attribute that to the horns. The background vocals that repeat the main vocal are not stellar - almost cheesy in fact. If those were taken out, the song is actually better than good.

More '60s tendencies with "Philomena", but for me the tempo or cadence was just off. 'Skip' on my player seems to be used on this song far too often. I'm also ok on skipping "Better Not Wake the Baby".

"Till the Water's All Gone" is a moody piece that I find getting lost in and letting it play repeatedly. Possibly the best piece on the disk.

Liking "Carolina Low" too. It's almost a John Paul White song, but it works. It's more Americana than it should be, but I really like it. And "Easy Come, Easy Go"is good, but it's not too far of a stretch to hear someone like Raul Malo tackle this song...and do a better job of it.

I like "Make You Better", but it seems to be trying a little to hard to be radio friendly - not that there is anything wrong with that, if they tried that more consistently, it would be a good thing, But the rest of their material, they seem to go against that grain on purpose, which makes songs like "Make You Better" stand out like a sore thumb.

The rest of the songs are fine, but nothing that stand-out.

I get that many did not like the King is Dead, but I really dug that whole disk. And I get that some did not appreciate Gillian Welch being so prominent on those songs, but I thought she was the perfect person to be there - and that pairing made the group and the songs better.

What a Terrible World... is fine, but it's not going down in the annals of recorded history as being one of the great disks. The group has done better. I get that it is Colin Meloy is the leader, singer, and songwriter of the ensemble, but it might not hurt to get other influences in there - to mix it up, because things are sounding too much the same.
Posted by Blobby at 12:07 AM