We Shall Be Free 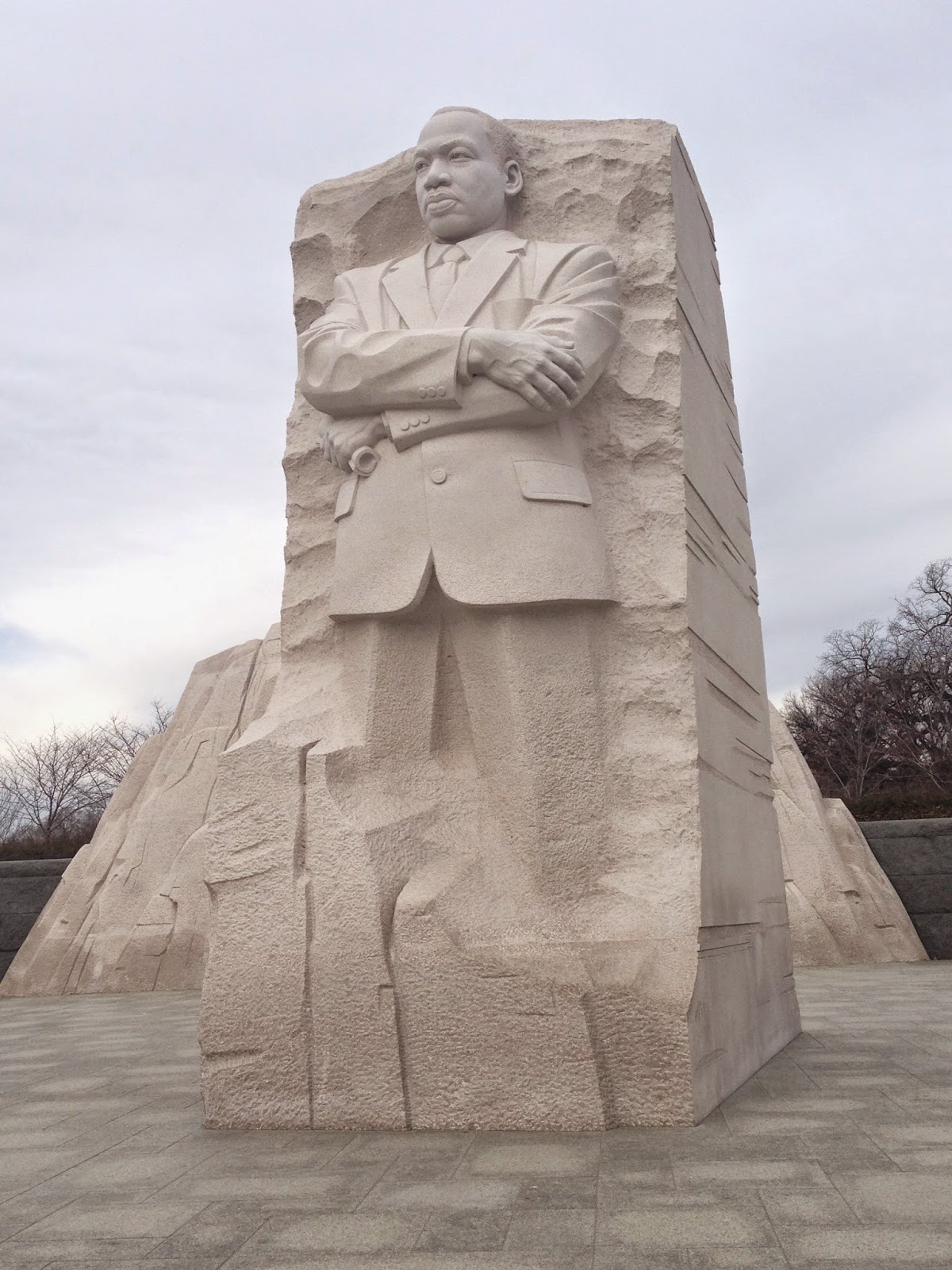 Tomorrow is Martin Luther King day. I don't have anything so heady to write that it should interrupt My Music Monday.

While in DC last month, we did make our way down to the MLK Memorial. The last time we were there, it wasn't.

A few things struck me about the memorial and actual site. It was simple and powerful. It was very well done (IMO). It was facing the wrong way.

Yes, I get that the space was on the Tidal Basin and to have MLK facing out over its expanse was nice. It was open. It was free.

However, right behind - ok by a few hundred yards - was the Lincoln Memorial.

To me, the link between Lincoln and King were strong. To have him facing the man who helped free the slaves and where King gave his "I Have a Dream Speech" (oh, I hope the King family doesn't come and sue me for using that phrase!), seems the most natural thing in the world.

Yes, I get that it doesn't provide a good entrance set-up for the site, or as good a flow. 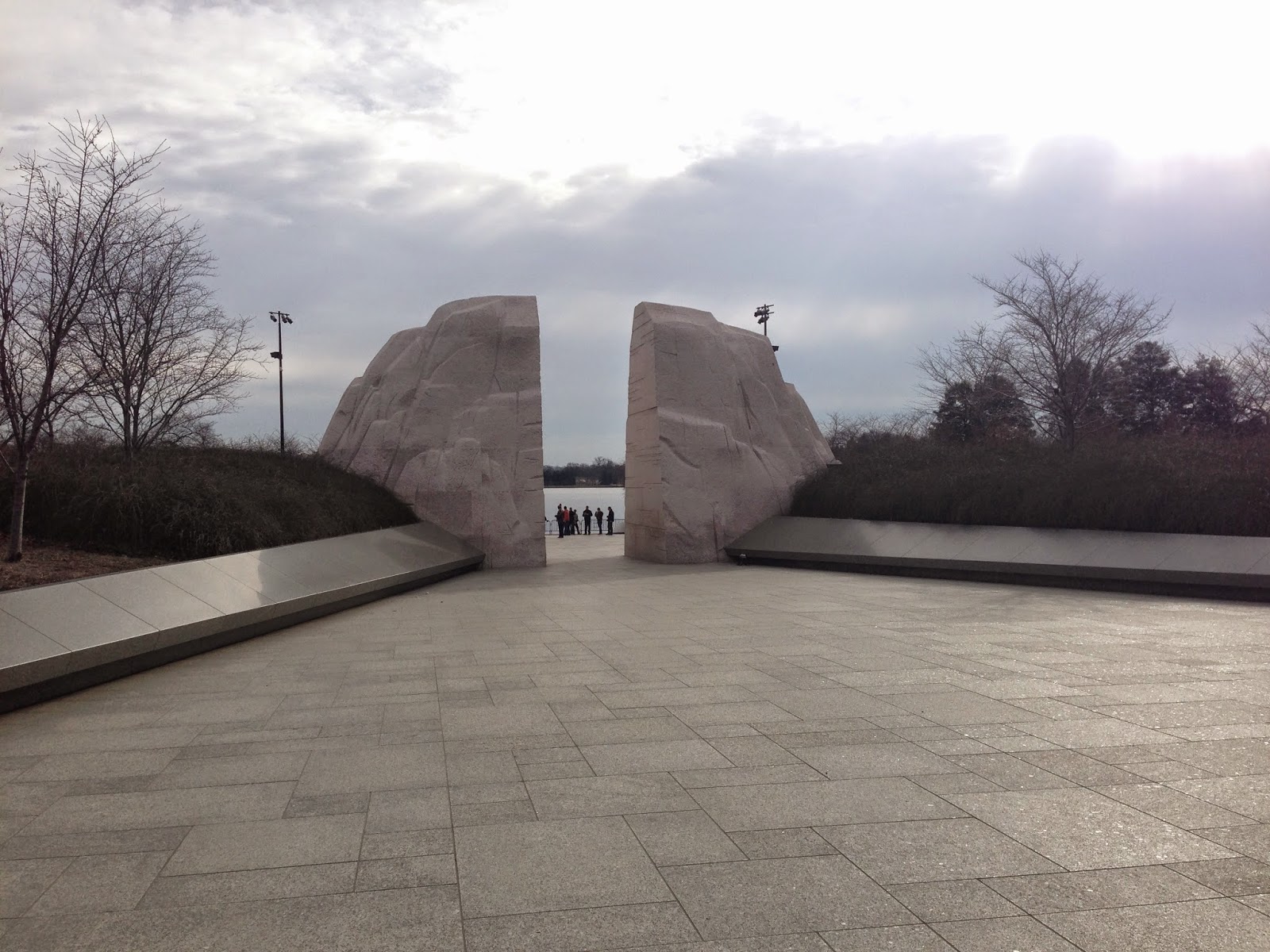 I loved entering through the "Mountain of Despair". This itself was much more powerful than the likeness of MLK. 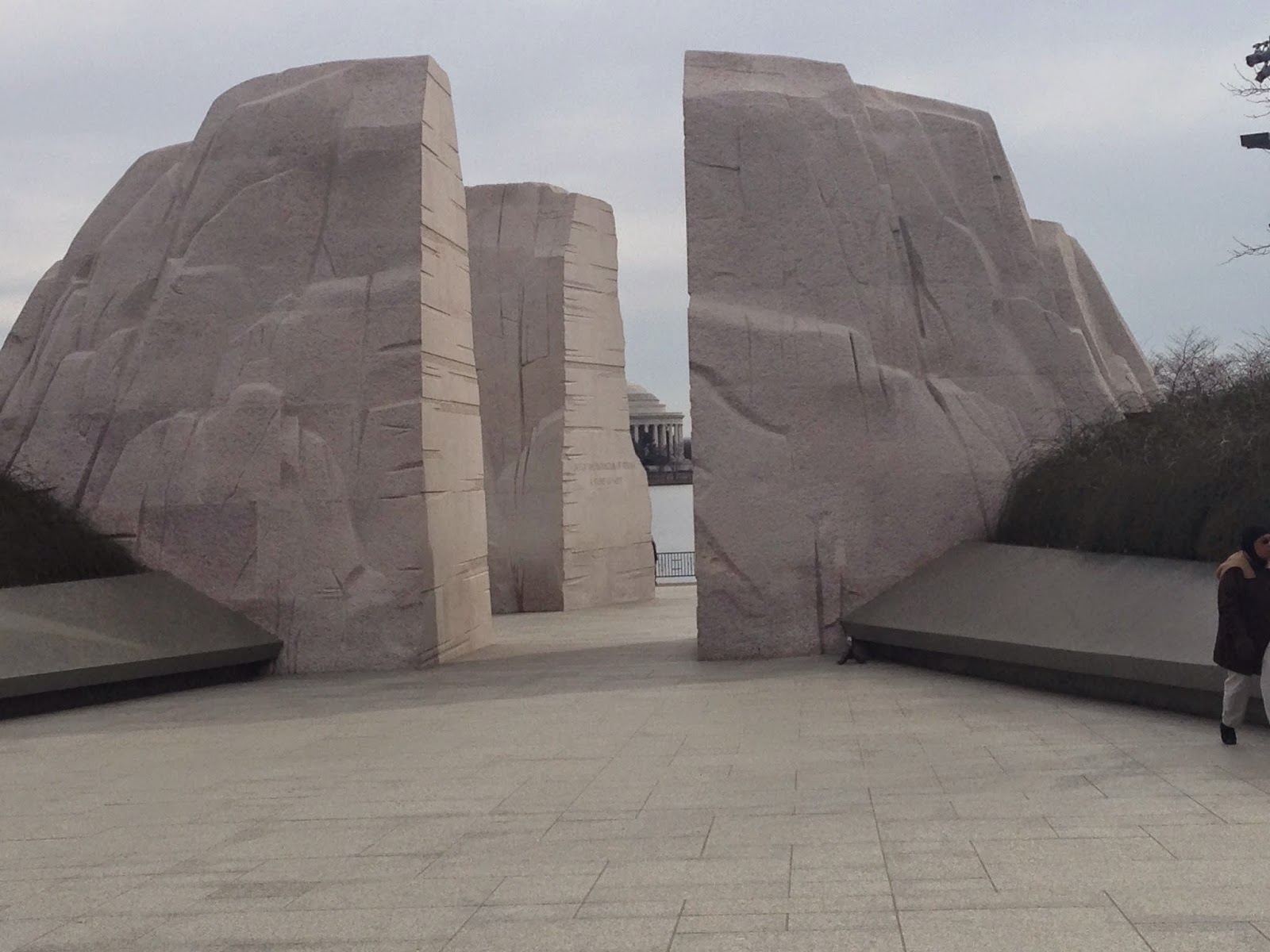 And I do like how it opens to the Stone of Hope.

And yes, it is a great view of how it opens up to the Tidal Basin and the Jefferson Memorial. And yes, even if you entered the other way and MLK faced the Lincoln Memorial, there are trees blocking a clear view, but still...... 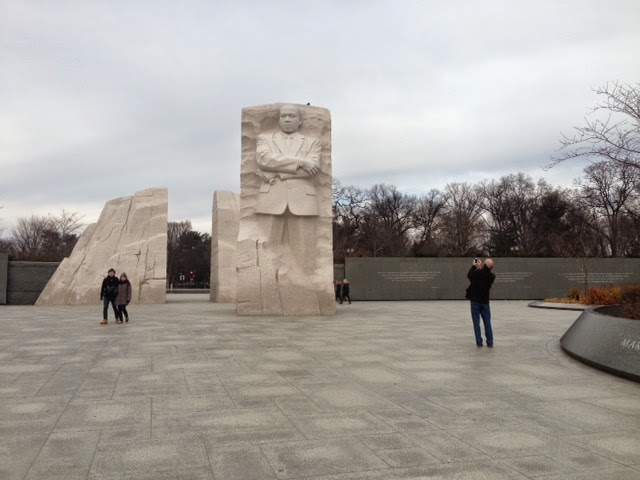 One amazing piece is a quote that was taken off the monument after it had opened. The once inscribed, "I was a drum major for justice, peace and righteousness". was paraphrased and not actual. I'm not quite sure how they removed it so flawlessly, considering the letters had to be 1.5" deep.

My mother-in-law doesn't like the way MLK's hands are crossed - that he looks too closed off. But when you're on-site, it doesn't seem that way. He's in a thoughtful, reflective stance. Thinking. Contemplating.

If you're in DC, I highly suggest you make the trek down to see it.

Freedom comes in many ways too - though maybe not the way MLK envisioned.

I'm hoping that SCOTUS taking up the 6th Circuit Court upholding marriage inequality and recognition of same sex marriages in certain states (Ohio!) will possibly mean legal same sex marriage for every single state......not that there that many left who do not have it.

It seems we'll know in June, if the case is argued in April (which it looks like April 29th).

I know a lot of folks equate the Civil Rights Act with Same Sex Marriage. There are valid arguments for both and against that analogy, though more for than against (once again. my opinion).

My one regret for the SCOTUS suit is that we are not part of it. Our "case" never got filed and others took up the cause. Allegedly, it was all political depending on what justice would be hearing which case as it was filed, and our judge was not one who looked favourably on the merits of same-sex marriage.

And as for Selma, it is not one of the movies I am clamouring to see. Besides hearing that LBJ's portrayal is buffoonish or the changes to the speeches (thanks to the King family) render them only 'in the spirit of' MLK....I just refuse to pay to see anything with Oprah in it.

Song by: Garth Brooks
Posted by Blobby at 12:01 AM

I never thought about the MLK memorial that way--facing in a different direction--but I loved it.

And I completely agree with you about Oprah.
Eeeesh.

I was at that memorial back in September. Beautiful. I see you thoughts on the orientation. I come at it from a different way. I was at the Lincoln and walked straight to MLK after. I took it as an extension of his speech. He is facing in the direction he stood when making the speech and at the time was facing a mountain. Through his speech and everything that came after the mountain opened and his message spills out into the openness. He at the forefront into the expanse of water, surrounded by his works as the water and expanse carry them to the world.
Happy MLK day and may the court follow his lead into equality, understand and righteousness.

I think the study of monuments (what goes into them, what works/doesn'twork) more fascinating than the person in the monument. I would love to get to The Capitol and see as many as I can.