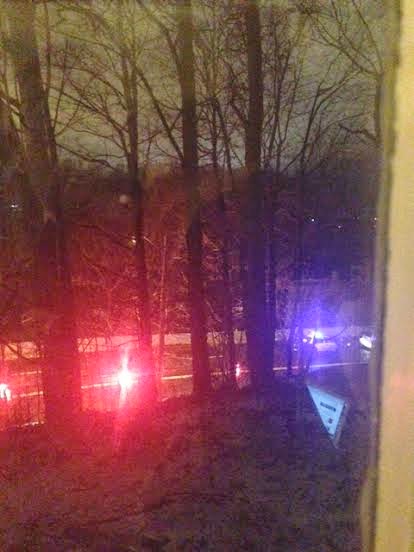 I lamented a week or two ago about living where we live and why it frustrates me. That lack of response from our municipalities just drives me nuts.

Again, we live literally on the border of two jurisdictions, and while oddly enough I know the demarcation - city officials do not.

So Sunday night, it wasn't an accident, but a stalled minivan. Dark grey - at that, on a snowy, sleety night. Right around a curve, blind to most on-coming cars.

Oh - and no hazard lights.

It was literally an accident waiting to happen.

I was about to call 9-1-1 when 7-1-0 told me to just call the police department. I did - but clearly the wrong one. But I knew it was the wrong one, they're just usually more responsive. They responded all right - they basically told me it wasn't their problem.

So I called Cleveland's number. I was reprimanded for calling the 'emergency line', and I was to call for non-emergent response. Mind you, nothing in the listing said it was the 'emergency' line....and you think they could have transferred me or past on a message?

Well yes, you would think that. But you'd be wrong.

And I'd say third time is a charm, but jebus - it was a TEN MINUTE phone call.

Of course, as I knew they would, I was told that wasn't in Cleveland. I told them it was. I told them where I lived. I told them how my property line was set up. He looked and agreed, but since there is no address on the street of the stalled car, he didn't know how to dispatch an officer.

Well honest to g-d, first he said he didn't know about any traffic instances and that he'd - wait for it - check Channel 3.  Maybe he meant a radio band, but I have a feeling he meant WKYC news.

He's asking me about addresses on this street - I said there are no residences or businesses on this stretch of road - which totally confounded him. I ended up giving him two streets on either end of the vehicle - all the time watching to see if this car would get hit. Not a thing against the driver, but I almost wished it would have while I was on the phone with this dork.....and maybe a lesson would be learned.

I just gave him my info, hung up and we went back to watching Downton Abby.

As you can see, police finally did show up. Two of them. And lots and lots of flares. They must have lit 15 of them.

At some point between Mr. Mosely dying his hair and Lady Edith starting a fire in her bedroom, the moved the car, picked up the flares and left. All thanks to me.

But 710 and I had the discussion of why I'd rather call 9-1-1. His point was that I'd still have to go through that rig-a-marole. Maybe I would. Maybe I wouldn't.

My point was - that 9-1-1 can figure out who to dispatch. No more ping-ponging back on my part just to get the right police station. Sure it wasn't a true emergency, but I could argue that I was 300 feet away, on top of a hill and that it was dark and snowing and that I couldn't tell how bad it might be down there.

I bet Carson could have taken care of the whole shebang with one quick phone call to the village.

Mrs. Hughes would do it just as efficiently, and with more delicacy and aplomb. ;-)

Sorry about the aggravation - when ive stayed up in the Heights in winter, I hear about this Cleveland/Heights division a lot. Sounds really frustrating.

g-d forbid you have an actual emergency you'd need to call about, they'd never get there.