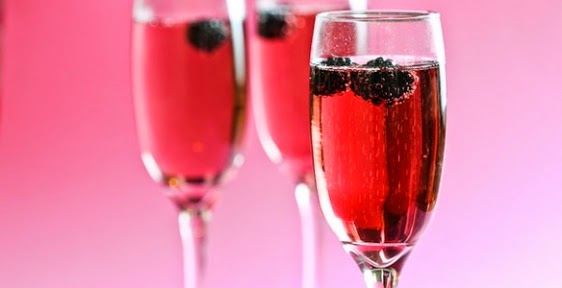 I started one a day or so ago, but New Years Day got in the way. Or the bar at an open house did, to be more specific.

I did have plans for a post, but that is now probably for next week.

Alcohol - the cause of and solution to all of life's problems.

Our NYD open house, which we've attended now maybe four years in a row, is by far our favourite neighborhood gathering. Steve & Laura do it up right. Casual, but well executed. Servers (ooh) and a bartender (oooooooh). And a lady to take your coat. It seems much more less casual than it is, but it is very welcoming and easy.

We got there an hour after it started, and still were one of the early arrivers.

After saying hello to the hosts, it was a stop at the bar. José was a very attentive and generous bartender. Glasses we're very full of wine. Probably too full for the Granthams, but for me, I was fine with putting a head on it.

Their featured cocktail was kir royale but I stuck with a dry white wine. Fully filled glasses. Oh yes, multiple. José wasn't one to stay behind the bar. He was proactive in getting you a new glass as he saw fit.

José was an enabler.

José practically scoffed at me when, near the end of the party, I refused a refill. But Blobby was
d-runk. ...and he was the help! Carson would have dismissed him with no reference.

I kid. José was great.

So were our neighbors. I really do like most of them. And all of the ones who actually showed. I'm always surprised how few take these guys up on this open house. We're not the most social of creatures, but comparatively, we do pretty well.

While they had food, I would have been wise to partake in more of it than I did - at least within the ratio of alcohol.

We had great conversations with folks.

When 710 and I were in separate groups, I was talking with two men, one of whom is a great guy, and the other I've exchanged nods and waves to while walking the dog, but whom has never uttered a syllable my way.

However, John and I were talking about his blow up, full size yard snow globes.....that light up and rotate. This is out of character for him and the 'hood. But it was kind of a joke to his wife, but now they are purchased, so I suspect we will see them in upcoming years.

Somehow, he mentioned they were very Pee-Wee Herman-esque. Which began a conversation between the three of us on Pee-Wee's Big Adventure and Pee-Wee's Playhouse.

Peter, John and I then just stood there throwing out random Pee-Wee quotes......and laughing. Everyone agreed it was Morgan Fairchild's best role ever.

John was super excited when I told him they just released the Playhouse on Blu-Ray. He hopes his wife will now get it for his upcoming birthday.

Both John and Peter were completely stoked when I told them Pee-Wee had a Christmas special. In my haze, I may have offered to host a viewing.


So, we went home, drunk-walked the dog and then I passed out took a nap for 40 minutes.

Not a bad way to end a holiday season.

pee wee herman - LOVE HIM! and I always thought jambi was a sexy genie in the box...

I'm impressed that you remembered all that and Pee Wee Herman.

HA HA!! Spouse & I are 50+ year old men too and we both LOVE Pee Wee Herman, often inserting film quotes into daily conversation.

Now, I'd like to say something about your drinking. I don't want to come across as 'endorsing' getting drunk but I do believe that there is a responsible way to indulge (or over-indulge) especially during the holidays. You weren't driving and you weren't responsible for the care of an infant, so there was no danger from enjoying a few (dozen) glasses of wine. You drank responsibly and I applaud your good judgement. There have been a few occasions when I have drank responsibly, but I get the stink eye from my Spouse.

Not that you have Netflix (yet), but they've got all of Pee Wee's Playhouse available for streaming now. I've been torturing the Husbear with it. :)