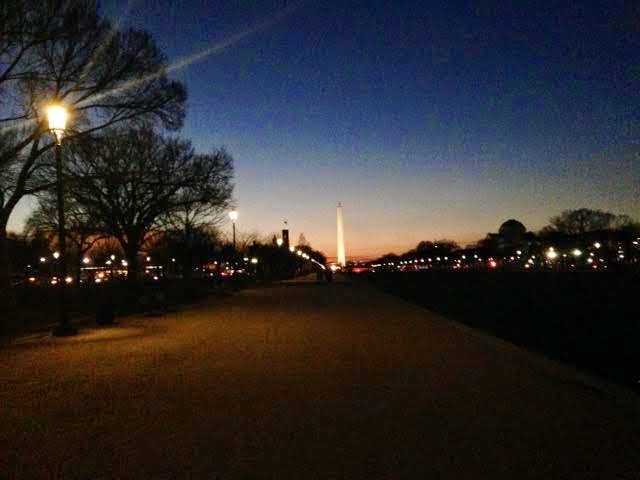 Oh yeah, we went to DC for a few days before the xmas holiday. I said I was going to write about it.....and then holidays and other stuff got in the way.

No worries. Better late than never.

Part of the trip was to just get away, but part was to visit 710's parents who don't live all that far from WDC.

As you know, or probably know, I love DC. I'd live there in a heartbeat if the stars aligned. But it is an expensive place to live - and I have no desire to live in the 'burbs of Maryland or northern Virginia - neither of which are that much cheaper anyways. I was reading the average time on the market for a house / apartment is less than 45 days. Often in the single digits, for the right place. Many times a place may never get an official listing.

We had no agenda. Nothing we had to see, per se, though we wanted to do a few things. Some you saw in my year-end wrap-up of photos. Some you did not.

The title image was taken on the Mall at sunset. The plan was to go to the Washington Monument to see DC at night. Alas, it was not meant to be - as the tickets were long gone for the last viewing, although no one was actually there to use them. Bastards. 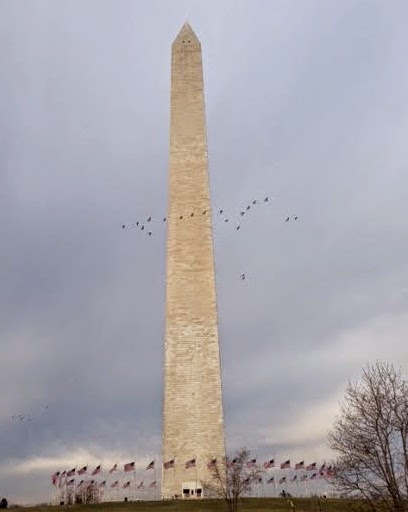 The next morning we got our tickets by 08:30. We couldn't get in until 11:00, so off to breakfast and wandering we went.

I loved this pic. The geese in bad formation going around the monument itself. 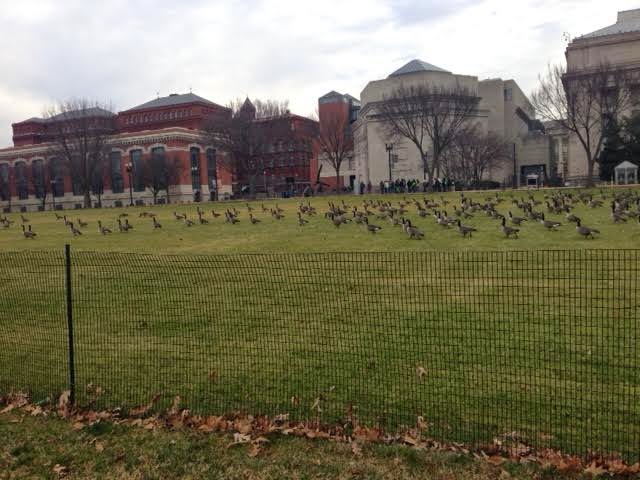 All of the geese seemed to be imprisoned here. I don't think they were Jewish geese, but their fenced in camp was right behind the Holocaust museum. Here many were ready for take-off. 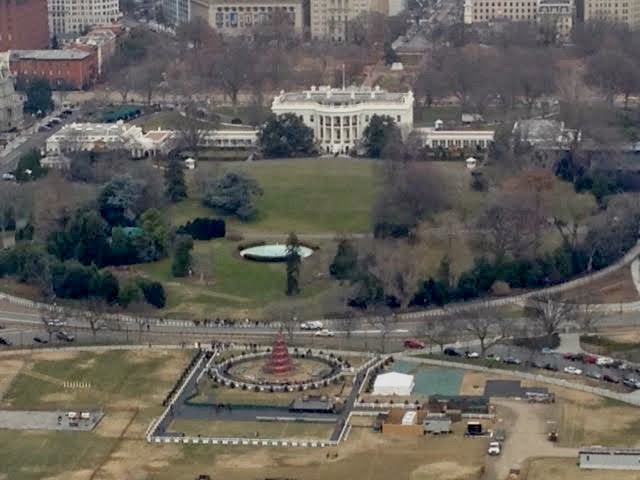 For the 228 times I've been to DC, I have never been in the Washington Monument. Nor had I any desire. But after the seed got planted for a night time view, I kind of wanted to see it. But we got day time tickets and that was fine. There were good shots of the entire city to be had, even though it was cold and pretty grey. Had we taken later times, it would have been sunny and blue out.

Below, at the Ellipse, you see the National Christmas tree. We did go at night to see them light the fifth candle on the menorah  - but it was a sad state. The entire thing. It ended up being like the worst county fair imaginable - though seemingly without the funnel cakes. But they did have clogging.....to "Frosty the Snowman". I couldn't get out of there quick enough.

But the monument itself was not bad at all. 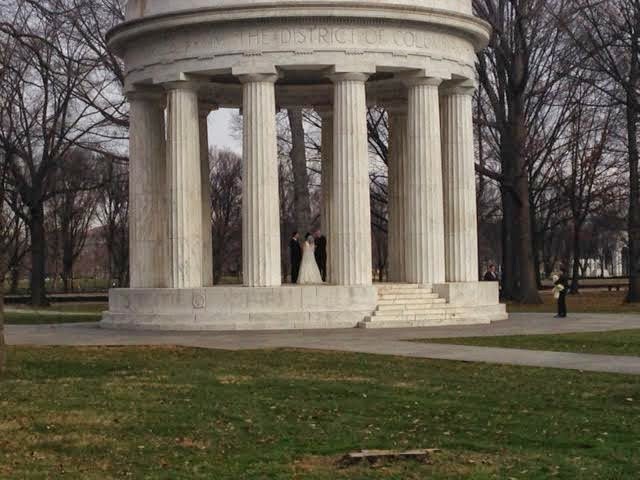 As we headed to other memorial sites, we walked past a couple getting married at the District of Columbia War Memorial. It was a really nice setting. 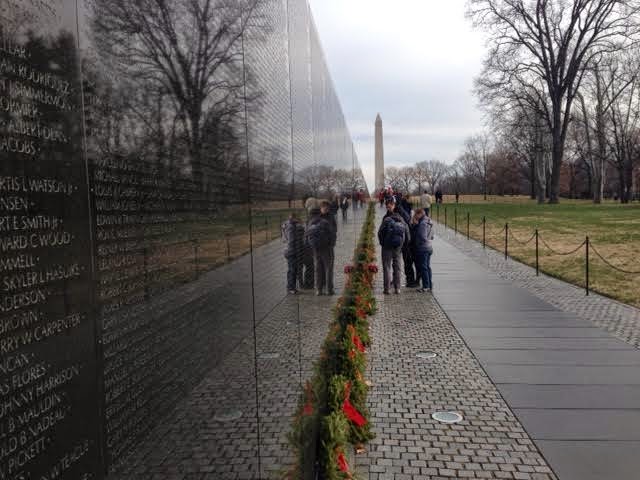 As always, we went to the Wall. Like Arlington, the Vietnam Memorial is one of my favourite places in DC. It's quiet. It's reverent. Honestly, unless there are little kids, there is almost no talking at all. It's such a different experience from the other memorials.

I love a lot of Maya Lin's work, but it must be so hard having your legacy solidified at 21 years of age, as she did with this design. 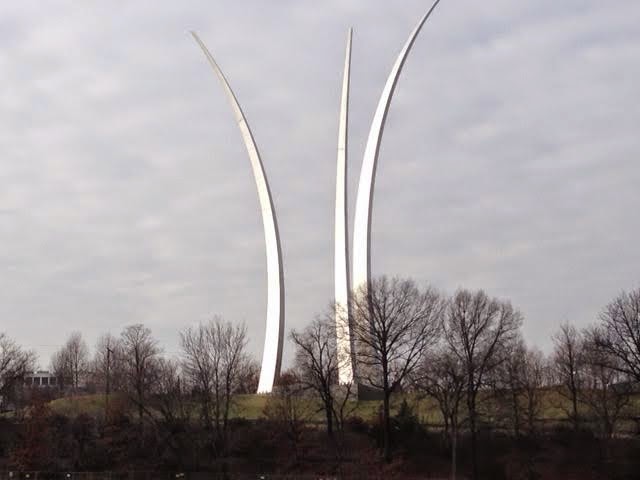 The next day we took the Metro to the Pentagon. You saw one of my pics for their 9/11 Memorial. I'll do a separate post on that some time. But from the Pentagon, I took a similar pic of the Air Force Memorial.

I totally got busted taking a pic like the above one from the parking lot of the Pentagon. That was a big no-no and their police force busted me. Taking pics anywhere but the memorial is a no-no, which I don't exactly get.

You can almost not take a pic of anything in the memorial without getting the Pentagon itself. But apparently the parking lot is off limits because you can capture a car with a worker's plates there (that I kind of get). But I was taking a pic of something off grounds.....but apparently that didn't matter. 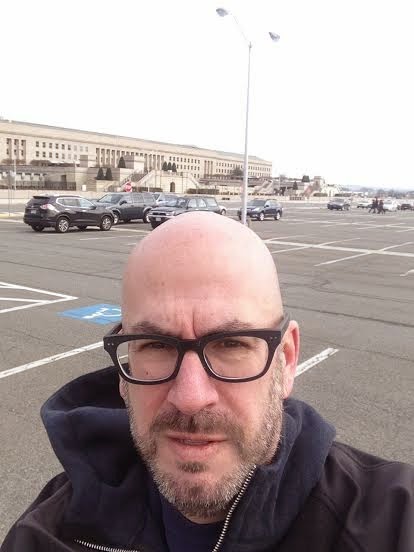 From there it was a big long walk to Pentagon City to catch the Metro to Arlington. 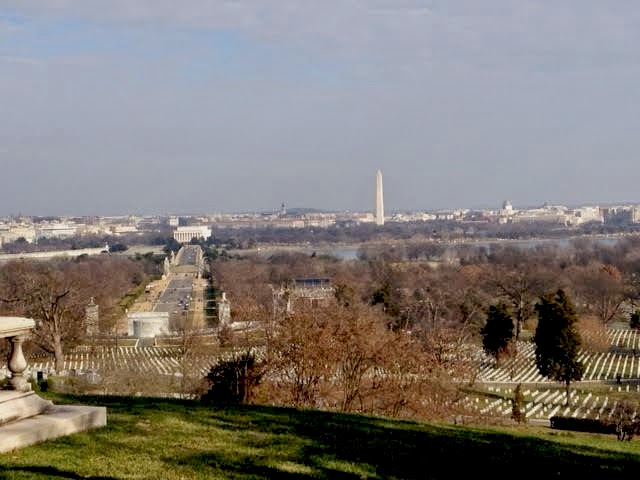 View from the Custis-Lee Mansion.

I always go to JFK's grave. And now Teddy is just down the way from RFK.
I only hit the Custis-Lee Mansion, which sits just about that site, one every few years. 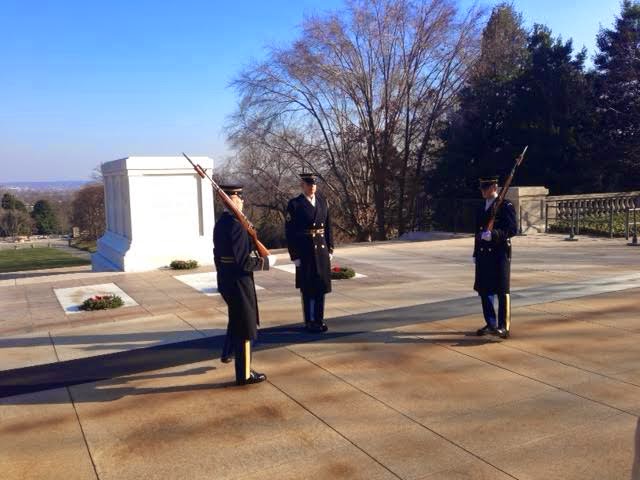 I always watch the Changing of the Guard at the Tomb of the Unknown Soldier.
It never ceases to captivate me. Even if just watching the guarding of it, and not the changing, it is still very impressive.


Oddly, right past the Tomb of the Unknowns, is without a doubt the ugliest plaque ever erected. So much so, that I'm making it extra-large so you can see, though feel free to click on to make bigger. 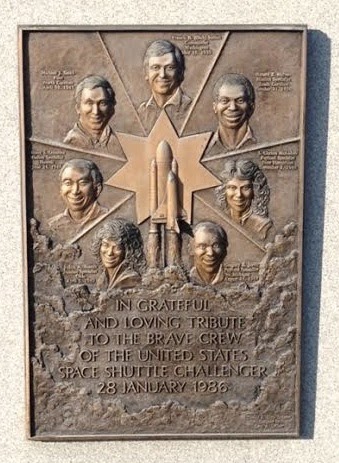 The folks on the Challenger deserved better. NASA has a great memorial to all astronauts who have died in duty. This is Arlington's one big fail. The ghoulish grins and gums on these guys is enough to scare the crap out of any of the dead in this cemetery.

I think I go here each time too hoping to see a new / better memorial to those seven folks. But I don't think that is going to happen. 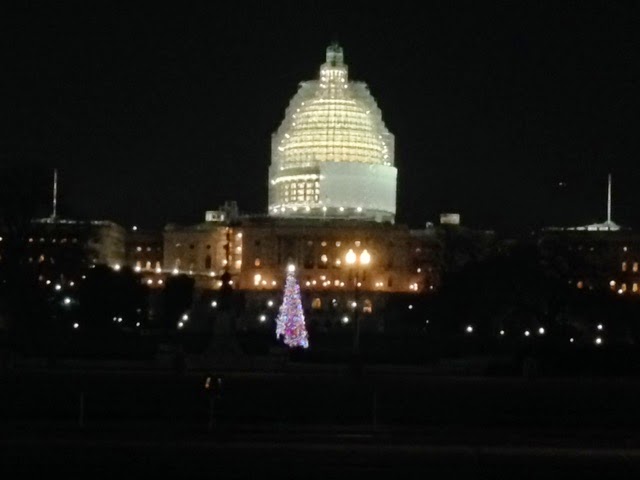 The one bad thing of using your iPhone as your camera anymore, is that at night, things don't always focus. Certainly not easily. I can easily say I took a dozen and a half pics of the Capitol dome that is under construction. NONE of them came out.

This image is one 710 captured. Even then he took as many as I. It is a neat site - and ruckiry (not Jon's boss), the 113th Congress had just vacated for the term, so getting close to it didn't give me that creepy feeling.

Oh - and one last pic. I think we were at our second day at the hotel when the husband had to point out our room number. 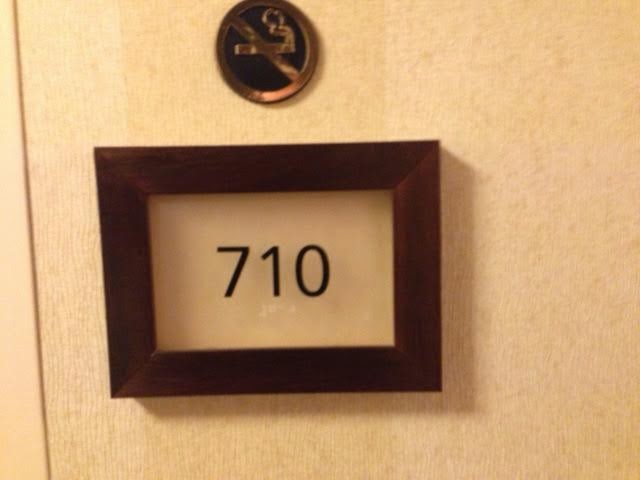 Song by: Depeche Mode
Posted by Blobby at 12:06 AM

I, too, love DC, though it's been over a year since we last visited.
And I've never been inside the Washington Monument and now you've given me the itch to do that.
Road.Trip!

Glad you enjoyed DC. I fell in love with the city and spent years figuring out how to work here.

What a wacky coincidence that your room # was 710!!

Holy crap! The Challenger memorial plaque is hideous. The faces remind me of the haunted busts in the Haunted Mansion at Disney.