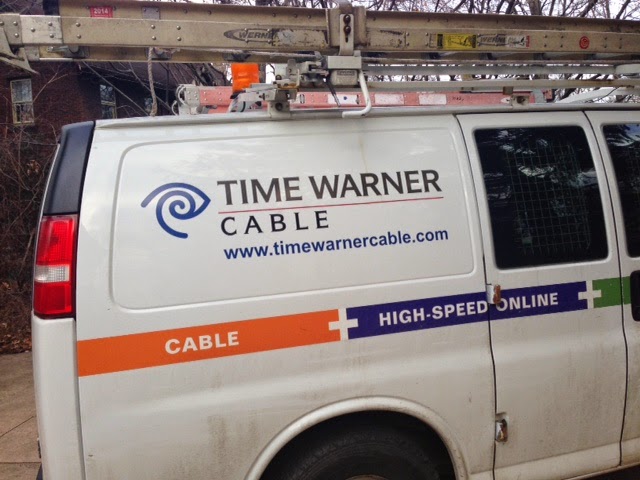 A few days before xmas, our cable partially went out - and then fully.

I'm not a fan....but like most cities, you have your choice of one cable provider or satellite - which might be two providers.

One of my sisters has satellite, and while it seems challenging to keep a picture in inclement weather, she still likes it better than cable.

TWC is seemingly no fan of their customers either, if their interactions with us are any indication.

To paraphrase Lily Tomlin's character, Ernestine, "we're the cable company, we don't care. we don't have to."

So there has to be critical mass to get your fucking cable fixed? And what is that number?

No, there was no escalation process - or so they said. No, they couldn't credit us for days we were without cable (except for any premium stations), because we could get an antenna and get our stations that way.

Well of course we could. But then I don't need TWC, do I?

I think my favourite TWC call was them saying there were no technicians in our area to help us. Five minutes later I was walking the dog and lo and behold there was TWC truck across the street. Good to know they have a good tracking system.

Oddly, we were trying to make a go of having no cable. My cousin cut the cord. My friend Stuart did the same thing. Becky was doing something similar.

I think I was liking the idea more than 710, though he tried to get on board. As I saw at Becky's and at our house, it was not an easy task to search for things. There is a lot of toggling to type shit in. And yes, you have to get into the mode of more on demand than DVR'ing stuff.

To watch things, there is planning involved. And consensus. After all, we are guys, and as Seinfeld once said, we don't care about what's on TV, just about what else is on.

And as for such network shows via the antenna - there is no pause function. The HORROR!!!!!

Yeah, I totally get that.

As time went on though, I kind of liked just looking for things we might not come across that TWC shows. I mean, if I never come across another episode of Property Brothers (ewwww-weee, those boys are f'ugly), I would be just fine.

Of course my cousin and his wife have been watching a lot of BBC programs, soooo very high-brow. Or at least, so it sounds.

Naturally, TWC finally came out on day six, fixing a block they put on our line, as they installed cable across the street.

Oh yes, it was as bad as it sounds.

And yes, we watched it. {sigh}

I'd say 'we watched it ironically', but I don't think one can actually watch tv that way. It just sounds better to say that when someone tries to pass off watching total crap.

So our non-cable experiment lasted six days. I at least liked dipping our foot into the water, but I'm not sure we're there at cutting the cord.....though I don't think I'd mind that much if we did.

Once you get somewhat accustomed to the fugly aspect of the property brothers the show is not so bad. And not at all as irritating or staged as Love it or List it.

Whenever we get the bright idea to go cable-free I think about that pausing to poop business and not being able to do that and, well, we still have our U-verse.

It seems to me that the Scott brothers are somewhat polarizing: you love 'em or you hate 'em. They certainly have an equine look (at least the twins do). I find it interesting that the one who is constantly changing his hair color is the "butch" one. Apparently he even has an ex-wife. The gay brother, who you usually don't see, looks significantly older, for whatever reason *cough*cough*meth*cough*cough*.

Although our cable situation is different here in Canada, and we now have satellite which has lots more options, we are becoming more and more dependent on Netflix to pick and choose what we want to see when....

And I woulda guessed both the Property Brothers were totally gay!

We dumped our dish a few months ago. I thought the Husbear would have a rough time of it, but he's warmed up to it.

Granted, we do have Netflix and Amazon Prime which we access via our Roku. And for everything that's current, I torrent those via eztv-proxy.net and stream them to the TV via Plex. Not that that is legal... but neither is butt-sex in Arkansas.