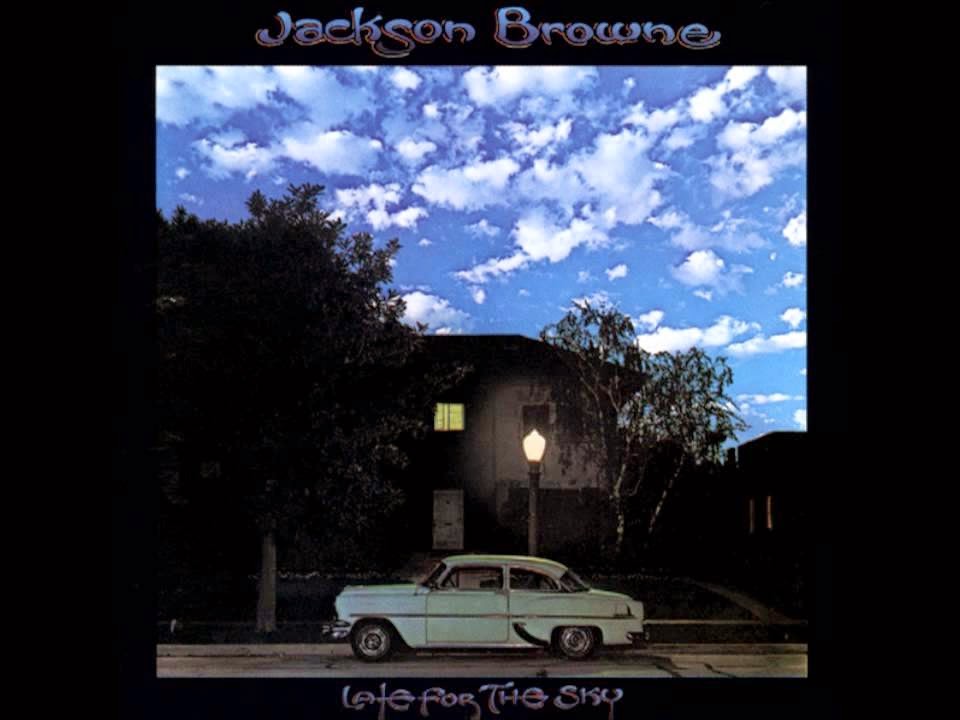 It has been ages since I've done a Classics post. But the Muses are still snowed in somewhere, with no way of getting back, so I have to go for a stand-by post.

So why not go with Jackson Browne and his third disk, Late for the Sky?  Why not, indeed. There are only eight songs, and not a stinker among them, though it would be tough to say there is a bonafied hit either.....and still clocking in at more than 40 minutes.

The every youthful appearing Browne (well maybe not as of late), have been around forever - as he was writing songs, hit ones, at the age of 16 and 17. Some of them ("Take it Easy") being recorded by the Eagles.

For such a young lad (this was released in 1974!), the songs are just amazing for someone his age, or 20 years older. Browne had a way with lyrics and a sometimes complex melody.

I will say this - and have in the past - he is a hard man (for me) to sing along with. He seems to go into tenor and baritone, sometimes in the same line or measure, and I can never quite make that transition. And of all his material, this seems to have the most difficulty.

Still, it comes down to the material and no one can sing it like he does. (seriously, listen to "Take it Easy", it's impossible not to hear his influence on that tune.)

I say the 'no one can sing' like he does, because a few have tried. I love "For a Dancer", and I love Linda Ronstadt and Emmylou Harris, but they butcher the song on their rendition. And these are two women who've made careers on covering other artists songs. Joan Baez, Alison Krauss and Union Station have also made attempts at some of these songs.

But the title song, "Fountains of Sorrow", "Before the Deluge" are exceptional. If the album were these four songs only, it would be worth the price.

And while the disk is now 41 years old {gulp}, it is not dated in any way. Excellent musicians and arrangements don't hurt his talents either.

While I still like Browne and he consistently releases new material - most of it better than decent - I don't come back to a lot of that as I do Late for the Sky (or the Pretender).

Jackson Browne has long been a favorite of mine; very little of his stuff that i don't love.

What a great surprise to come across this post. I became a Browne fan the first time I heard "Doctor My Eyes" and Late For The Sky album is one of my most cherished. There was a time in college (that was a little dark) when I wore out the vinyl playing this album, especially "The Late Show".

It wasn't until later that I learned about his fascinating life. As a teenager he was living in NYC with Nico, hanging with Patti Smith and Sam Shepard at the Chelsea Hotel or with Warhol and the Velvet Underground.

I saw a documentary about the Eagles and Don Henley talked about learning to be a better songwriter living in an apartment above Browne and hearing him writing at the piano in the apartment below.

And you're correct about the covers. I have enjoyed other vocalists recordings of his songs (Bonnie Raitt's cover of "My Opening Farewell" leaps to mind) but none of them are songs from Late For the Sky.

Thanks for the memories.