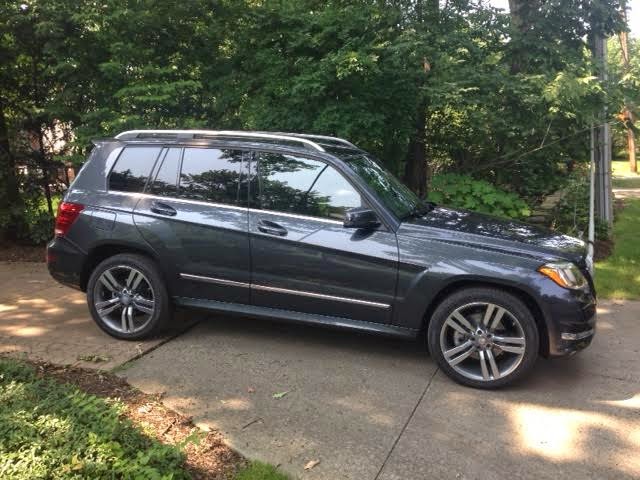 This isn't my Mercedes.

Well it is, for a few more hours. It's a loaner.

My fairly new car (9 months old) is already in for repair. Can you believe it?

The oil light came on, which in of itself is not a big deal.....until I started thinking about it. Nine months with about 8,000 miles on it and the oil is low?

I went through two Izuzus, one Jeep, one Volvo and a Infiniti without ever ever ever having to put a drop of oil into it between regular maintenance.

Don't get me started on the unreadable Mercedes dipstick. I could be full or not have a drop in it and I'm not sure you could tell. Horrible design.

So I put half a quart in, and there was no change to the warning light.

But that's hardly why it is in the shop. The day before and the next, for a while, every single electronic safety feature failed, lighting up my dashboard like a christmas tree.

On top of that, I would say at dead stops, the car lost 80% of its power. Eventually it would get up to speed, but very very slowly. The cars behind Blobby were not amused. Nor was Blobby. How they didn't run into me is a minor miracle.

So, I call MB and let me tell you, so far, I'm very very unimpressed with their customer service.

I expect when you buy that level of car, even if it is the cheapest model - like mine - you expect a certain level of service. So far......no. In theory, I'm still waiting for them to come out and program my garage door opener or call my insurance agent to tell them I purchased a new car..................nine months ago.

Yes, I did both those things, but they said they would and I haven't heard 'boo' from them since.

The intake guy was ok, but not great. He said that my car, two weeks after picking it up, had a letter sent about an electronics update. I said I didn't receive such a notice and he said I wouldn't because it wasn't a safety issue.

I finally said, "losing power to your car seems like a safety issue to me.".  He thought for a second and agreed with me.

At least he laughed when I told him my loaner had better be an S Class.

But I got the GLX - and you know, I'm kind of sorry I didn't spend the extra ten grand for a used one. Yeah, I could never afford the new one. I'm not sure I could afford a used one either.

The interior set-up is almost identical to mine - save the radio/navigation display - but it sits higher, which I forgot how much I like. And even though mine has power, this one has power!  It seems to eat gas like a mo-fo though, but I've been doing a lot of driving these last few days.

I get my car back later today. Honestly, they had to replace a bunch of electronics and the accelerator.

Did I mention this car is nine months old?

I totally forgot to ask about the oil. I'm not sure if I was low or if it was just an electronic malfunction. Nor did they offer. I'll find out later today.

methinks you got taken to the cleaners. ditch it and get something reliable, like a hyundai.

I'd have someone's haad by now ... preferably under one of the wheels of my car.

That dealership sucks! Is there an alternative MB dealership within reason?

I had a Mercedes once. Once being the key word in that sentence. I then made the mistake of keeping it after the warranty ran out. I figured they had already fixed everything or at least it felt like it...not. So then I bought a BMW. Well, like the Mercedes, it was pretty to look at and loved to be off the road and in the shop. I have a Ford and a Toyota now, and am very happy. I only see the dealership for regular maintenance which is quite nice.