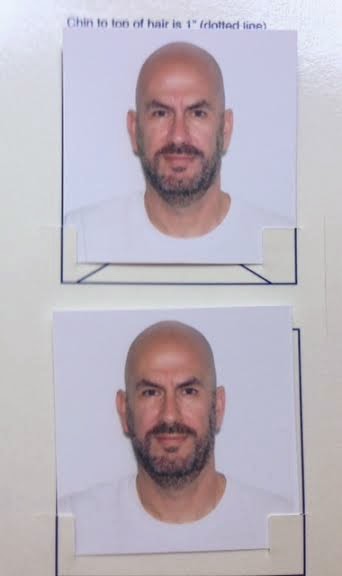 I can't believe it has been 10 years, but it is time for a new passport.

It is not like my old one got stamped tons of times - mostly just trips to Mexico and Canada. Oh, and it had to be shown when financing this house. But I'm hoping to change that in the near future - the trips, not buying a new home.

My last photo - taken on a whim when in Portland, OR - did me no favours. I probably should have had it redone, but you know me: it costs money and I'm cheap, but when it comes to things like that, I'm also lazy.

710's passport has already expired and mine is set to at year's end, but we've sent them in to be updated. Between friends and cousins, there are just horror stories from the State Dept. on getting them back timely - or at all.

My now infrequent man-date, Scott, had to drive to D.C. to pick his up  and drive back) a day before he left for It'ly. That is too much pressure for me. I'll have mine months in advance of whatever trip we want to take.

However, 710 not having his has potentially put a crimp in maybe a weekend trip to Niagara or Toronto.

Laugh as you might at Niagara, but we love the American side. It's not the tacky Canadian sideshow. Goat Island and the surrounding park is beautiful There isn't a main street running right next to it like the other side.

Though we do love the view from the Canadian side.

So for the time being, any long weekend trips we make will be bound within the contiguous 48.

I'm not unhappy with my passport pic and since they are now digital, I had the option of redoing it, but I left it as is. It seemed ok - though it might not represent me for another decade.

I swear the top and bottom views look different. Eyebrows and beard seems darker on the lower one. The smile seems a little different too, though both pics are actually identical. Weird.

So in six weeks or so, I should have a new passport. Assuming there are no fuck-ups.

Song by: Joe Strummer
Posted by Blobby at 12:02 AM

we just came back from Canada. I hope you have a good time in Toronto as we had.

I agree with you on niagara falls; stay on the US side, but take in the view and the "under the falls" tour on the CA side.

Never seen Niagra Falls. Last fall I had to renew my passport, in fact we both did. Sent them for regular, not rushed, renewal and they were back in less than four weeks. It was easy and speedy.

I think I need to find my passport