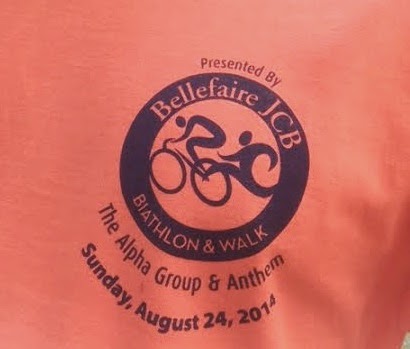 This last Sunday, David and I decided to forgo morning yoga to volunteer at the annual Bellefaire JCB biathlon.

At first we considered maybe riding the 12.9 miles, but one our our cousins, Betsy, chairs the event and all of the sudden we were slated to be on the bike route directing race traffic.

Originally, David and I were also scheduled to be together, but at the last minute some scheduler split us up.

To be honest, it was probably for the best. In my mind, I see bikers piled up and blood and body parts all askew, all because we were having fun and making jokes about something else.

Instead, I got paired with a man named Harvey Wiseman. Harvey was the Jewish Abe Simpson.

I arrived at my post - the half-way mark on the route - at 07:45 and Harv was already there, orange neon flag, already to wave to direct bikers to 'stay to the right'. The problem was that the race didn't start until 08:00 and we were still 6.5 miles away from the starting gate.

So we had time to talk. Or Harvey did.

Why do we complain about education when we don't buy the schools paper and pencils? Why do we fund foreign countries? Herbal remedies are nonsense!

He was actually harmless enough. I felt bad admitting I wasn't a Big Brother for the JCB when he told me he had been for years, but can no longer relate to kids these days.   ....and he doesn't want to relate to them the way they are now. I get that.

But Harvey had been a Big for years, and I admire that.

The race itself was ok. Being at the halfway mark, there are no 'groups' by that point, just individuals, as everyone has had time to space out.

You had your over-achievers who took a little race like this wayyyyyy too seriously. $5000 bikes for their 12.9 miles with all the tricked out wheel shells to lessen wind-resistance.....in Beachwood, Ohio.

But I suppose if I paid that kind of dough for a bike like that, I'd be entering every fucking race in the region.

There were the weekend warriors who were only doing personal bests...or attempting them. There were the folks just doing their part for their community - and chatting and exchanging recipes along the way.

I will give it up for a woman to told me she hadn't been on a bike since she was a kid, just bought a bike the previous day and was now on a 13 mile ride. Great!  .....but her 'taint  is gonna be sore for a few.

I was surprised at how many participants thanked me just for waving a flag. I wasn't going into this for any kind of thanks. I tried to give them words of encouragement - like "you're half-way through". Some people's eyes lit up like "YES!".....some were like "oh fuck.....I'm only half-way through".

I'm pretty sure the back of the pack thought I was an asshole when I would say, "keep going - you can totally win this!"  Or the guy who seriously wanted to know where the bike repair crew station was, and I told him that he was the bike repair guy.

My absolute favourite was a guy in the first third of the riders - and handsome as all get out - and as he rides by me, amusingly says "ewwww.....I'm getting beat by girls!".  I just started laughing.

Well maybe he was my second favourite. This guy might have been my first. 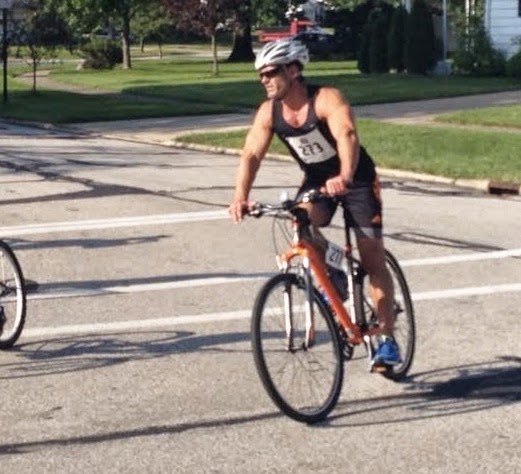 My friend Jeremy said I only volunteered because of the DILF.  Totally not true. It was for Betsy and then the JCB.......but I'd be lying if I said a benefit wasn't watching the DILF.

On an end note, since the race started at 08:00, I was done by 09:30 (the last straggler hit the half-way point then) and David and I still made yoga.

nothing wrong with getting some eye candy to keep the spirits up.

Volunteers make all the difference in these types of events. I've broken out in tears thanking someone for handing me a glob of vaseline to dab on my taint. Accept your praise, knowing the praiser meant it with all their heart (and taint).