I Can Feel Your Heartbeat 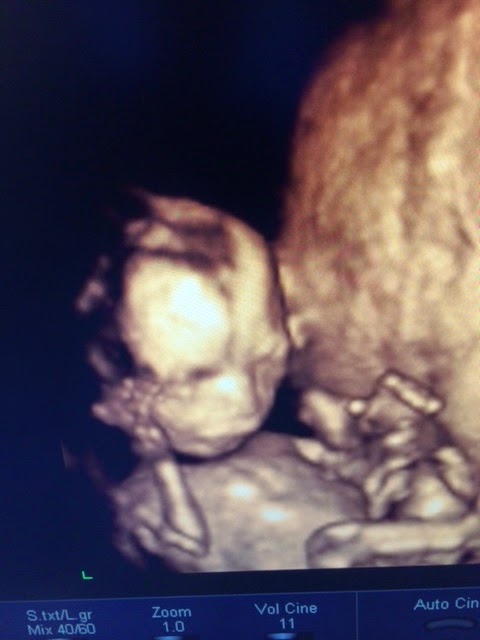 Another friend. Not "Jerry".

Anyways, this friend had just returned from - and I kid you not - a Sonogram Party.  (Trademark Pending.)

Lest you think that this is a party where the "woman" shows off her sonogram, you'd be incorrect.

Secondly, no, this is where you invite people up to an office where you get your sonogram done. As the soon-to-be grandads, grandmother, g-dmother, brother and yes, the baby daddy "all sit together on big, lounge-y couches and watch on a huge screen tv as they showed us every view of our grand-fetus. Soothing music and candles, etc."

Now, if I'm getting 3-D, then damn it, I want 3-D IMAX. If it's gonna look like something from Alien (and it does), then I want there to be popcorn and Milk Duds, please. I forgot to ask if special glasses were needed. I'm sure I have a few pairs I didn't recycle from all those expensive movies to which I went.

He also didn't mention anything about previews....which are always the best part.

As you might imagine, "all the females were all oohing and aching, whilst the males were either silent or fidgety".

And oddly enough, none of that is even the best part of the story.

"For an additional fee, you get a damned Build-a-Bear with the taped actual recording of the fetus monster's heartbeat inside."

Now, I laugh because, well because of many things, but especially because this is all coming from the soon-to-be Poppy, or whatever he's going to be called.

Between Jerry's and this friend's story - within hours of each other - this last Monday might go down as the best. day. ever.

Song by:  the Partridge Family
Posted by Blobby at 12:09 AM

Maybe if someone had given this girl--and the Baby Daddy--a 3-D image of what their life will look like for the next 18+ years, we wouldn't be crowded into an office to see a sonogram of a tiny wiener to ooh and Aah about

I'm tasting a little throw up in the back of my throat.