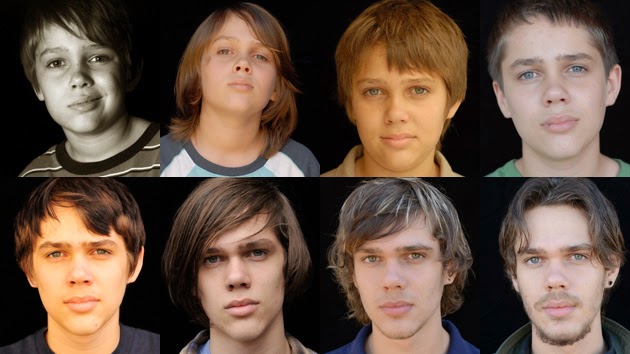 The premise for the movie alone isn't groundbreaking, the method in which it was achieved is monumental.

If you haven't been up on it, the movie follows a family  - mostly the boy - over 12 years.

The movie was actually filmed a few weeks each year over a 12 year span, so the actors aged naturally - no CGI, no prosthetic make-up.

Director Richard Linklater and Ethan Hawke, who have teamed up to make Before Sunrise, Before Sunset and Before Midnight (all critically acclaimed) do it again with Boyhood, though this film might actually be commercially successful, based on rave reviews (100% on Metacritic and 99 on Rotten Tomatoes) and from what I can see, packed theaters. Ours was on a Sunday afternoon. Go figure.

Aging from 6 to 18, Ellar Coltrane does a really nice job as a newcomer. Honestly, while it's hard to call him a 'newcomer' when it is one of the few roles he has ever had (yes, I looked on IMDB), he's had over a decade of on-the-job experience....just on this project.

Linklater's script (oh yeah, he wrote it too) is nicely paced but low key - much like the Before trilogy. The transitions from Coltrane's character year-to-year is very nicely done and without any cutaways. It is all very organic.

Much like real-life growing up, it happens, but not usually in huge moments, just over long periods of time. There are few big moments in this movie, but it is almost a three hour running time, though it did not feel that way. The character's progression seemed as natural as seeing him go from 6 to 18.

Coltrane's "Mason" clearly grows up, but so does his father (Hawke). Being a young father did not help dad mature, and while Hawke is integral and the argument can be made that he is one of two boys that grow, he is not in the film as much as Coltrane - who might actually be in every single scene.

I'd say at the latter part of the movie, as Mason nears the age of my nephew, some of the similarities in behaviour are amusing. His / Their deep thought process where they feel intellectually superior. I leaned over to say something to 710, but he knew what I was going to say. He saw the same things.

I did read one dissenting review of the movie asking about the lack of conflict in the movie. As I said, there are no big moments. Life is the conflict. Growing up day by day is the conflict. Even Mason asks his dad 'what is the point of it all'.

Dad has no answers, but he's honest about it. He tells him we are all fumbling are way through this thing called life.

And ain't that the truth.

I really enjoyed the movie. If you have a three hour block of time, I suggest going to see Boyhood.

Delighted that you share the same high opinion that many of us do, the majority in fact, it seems. Was apprehensive that you might be a dissenting voice - not that there'd be anything 'wrong' in that.
I'm still mystified as to why the film works so well when, as you've said, very little of significance happens. But it does, and it's all to it's credit that it manages to pull it off without huge melodrama, special effects or gimmicks. Whether it gains a reputation as being a milestone in cinema (at least in this present century) time only will tell. Meantime I can only concur with your recommendation for others to 'go see'.