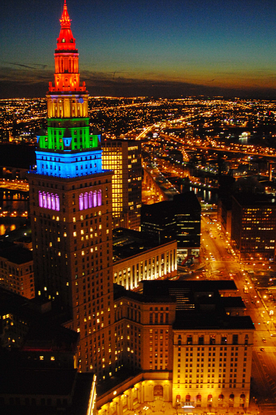 It's official. Gay Games 9 has concluded.

It was a great thing to have them in Cleveland - and I do not think I'm saying that just as a native.

Allegedly, the average athlete spent about $2500-3000 to be here, including lodging and fud. More if they flew into town.

The camaraderie seemed to be apparent, at least what I saw, but there were folks who relished in their wins and wallowed in their loses. They all took it seriously, so that the synchronized swimming thing didn't happen was not a bad thing at all.

I was speaking to what I would call a tall drink of water, about his teams loss in water polo finals - and to an unseeded team, at that. He was taking it rather hard.

I asked if he was happy with the way they played, as I was trying to have him be a good sport about it, and while he didn't necessarily blame his teammates, he did mention that some of them were out until 05:00 the day of the game. He also called out the other team for bringing in new guys for the final game. Well rested skilled athletes. He kind of stepped back a little when I called them 'ringers'.

Apparently, according to him, this is not an uncommon practice, at least for the gay water polo set.

It seems unseemly, but clearly there are no rules against this, or no one is pushing for punishment if there are. So I got his frustration.

But I did ask him about his reception to Cleveland. He couldn't have been more positive about it. He said he had done the last five games (he did not seem old enough to do the last 20 years of Gay Games) and that Cleveland was by far the most friendly experience he has seen. He though people in Chicago and Atlanta were much more hostile about them being in those cities. I found that interesting.  ....and he is from Atlanta!

I asked if he and his teammates had done anything good for food in town, but he said no - just slices of pizza and eating whatever they could, whenever they could. He didn't really take me up on my offer to make suggestions. That's ok. It was nice just chatting with him.

He stood up to make his exit and when he did, he truly was a TALL drink of water. 6'9" he said.

He looked big just sitting and chatting, but honestly I had no idea. I'm guessing he doesn't play water polo in the shallow end of any pool - though at 6'9", even the deep ends might be shallow for the likes of him.

I'm sure he's heard all the tall jokes and comments that ever been invented, so I didn't focus on his height. We shook hands, I wished him well and he was gone.

Closing ceremonies were last night, and while the participants didn't have the best weather here, from all accounts, they had a good time. And I have not heard on Cleveander say a bad thing about the games being in town.

I think the Gay Games have lost their relevancy. Most gay men that I know compete in main stream sport venues.

What a great honor to have them in your city and a great experience to be able to volunteer. Thank you for volunteering and sharing. At a time in history where we have our first and only NFL player drafted as a rookie this year and no MLB players yet, I feel the games are relevant.

It was a great week. I believe we will give it another go in Paris. Thanks for volunteering Mister B de Yoga

that sounds all well.