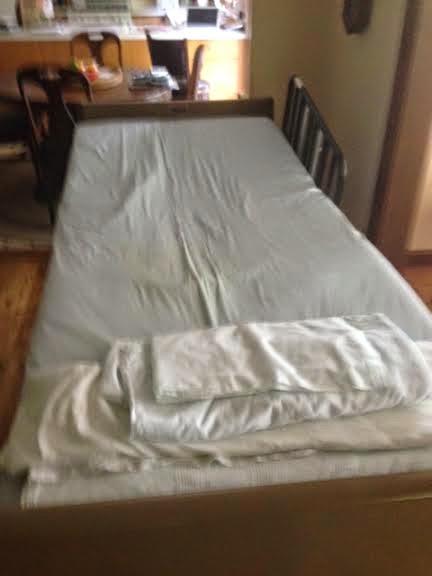 I didn't know how to ease into that sentence, so I didn't.

I could have done the whole "the cat is up on the roof" joke intro, but then it'd be another week before I got around to telling you.

His death was not unexpected. The part that was, was his ability to hang on as long as he did. He'd been in somewhat of a decline for months, but the man was a fighter. He was four months and one day from turning 94.

My genes are strong and long. His mother died at the same age. I've said before, I have no hope of getting out of this life early.

He passed in the middle of the night, as I somehow knew he would. While I'm torn on whether I wanted or needed to be there at 'the' time, I believe many people choose to go when there is no one around to bother them.

I am not equating my father to a pet, but it is well documented that dogs and cats leave to be on their own for dying. When you're bedridden, you don't have that opportunity.

In certain ways, my father got to go as he wanted. He was at home with my mother.

We made the decision to put him in Hospice and bring him home as opposed to having him spend his final days in a hospital or nursing home. And while the Palliative Care doctor thought he'd only have a few days to live, he stayed with us for 16 more. The longer he stayed, the more I silently wondered if we had done the correct thing.

But in the end, we did. He really had no true alternative.

I saw him struggle with the one alternative he did have, but when it came down to it, he only considered that so as not to leave my mother alone. While that is a noble and loving gesture, the reality came down to quality of life, for both of them, had he opted for anything other than Hospice.

Oddly, or not, it was not my father I've been worrying about these last weeks and months. My thoughts have been with my mother and how she will do. I don't doubt every person who experiences this thinks similar thoughts about the one who survives.

My sisters and I have been diligent about making sure she has food and company. At some point, to a degree, that will taper off and she will find her footing - albeit a different foot, no doubt.

Over the years in this blog, I've mentioned several times about becoming an adult: making our wills, getting married, getting a financial planner for retirement - but this probably trumps them all.

I love that his grandkids knew him and were comfortable around him. I can't say I had that experience. The youngest is the age I when I lost three of my grandparents. So he'll have memories. The older ones have many more experiences that I never had.

I know for me the grief will come, but part of me thinks I worked through some of it during the last month. But I've also had my focus on him, the hospital stays, the rehab stays and Hospice. Now that there is none of that, grief might look different to me.

He will be missed, but he gave all of us a good foundation and we will do our best and move forward without ever forgetting him.

may your father rest in peace. :(

So sorry for your loss, but he went at home, and peacefully, and I remember what a comfort that was for me when my mother passed away.

I'm sorry to read this post and I am sorry for your loss. At least your father lived a long life.

I'm sorry about your dad, I know you, his family and friends will miss him. It does't matter the circumstances, it's never easy. Eventually you'll be able to remember without pain or sadness and only with love.

That was lovely. Thank you for writing and sharing this with us. I hope you are doing well enough under the circumstances. Your post will give me strength when it is my turn to see Father go.

I'm so sorry. Was just getting caught up on my reading and saw your post. I know I'm late but wanted to express my condolences to you regardless.

Much belated *hugs* to you.