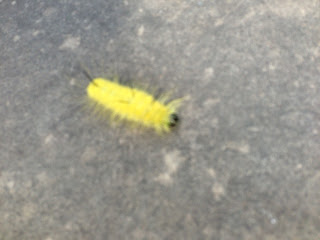 So, yesterday I "claimed" to have seen my first Woolly Bear of the year.

I was corrected that since it was not black or / and brown, it was not a Woolly Bear, just a caterpillar.

Sheesh - rain on my parade.

I stopped short of telling the person that maybe it was just a RuPaul Woolly Bear®.  I mean, "he" seemed to be dressed so over the top, that it is plausible that it was just a drag-queen wooly bear.

Actually, I can't tell you how many years it has been since I've seen a Woolly Bear or a caterpillar. Maybe a decade.  As a kid I used to see them all the time, but as a kid, I had a lot more free time to do nothing than is my current situation.

This pre-butterfly was spotted on my morning walk with Peter.  He noticed it, but didn't really stop to investigate.  I wouldn't know if a dog ate this kind of thing or not.  I would have tried to stop that action - for all three of our sakes.

I don't know if it's anywhere but Cleveland, but for eons we have had Woolly Bear Festivals. Not that I've ever been bored enough to go to one.  I suppose it would give me a reason to see a cousin of mine who lives in Vermilion, but it seems like quite a hike just to see how furry these beasts are.

You see, legend has it that the hairier that Wooly Bear, the harsher the upcoming Winter.

Dick Goddard, our 164 year old weatherman has been going on and on (and on) about Wooly Bears since I was a tot.

Honest to g-d, Mr. Goddard has been around forever. A few years ago his 39 (!!) year old wife was arrested for physically abusing him.  The newspaper stated his age at 73!

He most certainly had to be 65 when I first met him when I was an 8th grader - and let me tell you, that was quite a while ago. 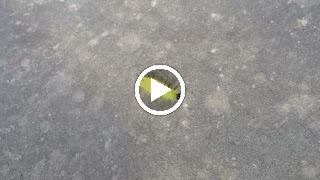 The guy can really move, huh?

So that's what I saw the other day! I think it's a bad weather omen.

That's an interesting regional difference. In KY, the brown "wooly bears" are supposed to indicate the winter by the black bands on them. For instance, black band in the middle means mild winter to start, then harsh, then mild. Of course it is all based on genetic mutations, but try to tell that to the old folk!

I think anonymous sounds a lot like the Geo part of Georty.