We had a grand time in Columbus this last weekend....headache non-withstanding.

Yes, you hear me talk about my "email group" often and have even seen visits from four-fifths of us.  It is rare you hear that we are all physically together as a collective.  Yes.....like the Borg.

I would say most weekdays we all exchange a few emails. Some days, depending on the event, it might be dozens.  This has gone on for years and years.  Normally we do take weekends off.  Still it is great to be in touch with a group of friends for 25-28 years. (I've known Jon longer, hence the stretch in years.)

While I certainly hope not to take my friends for granted, isn't it odd how to a degree we do. Not in that traditional sense, but the way that we assume things will always be the same and that we will always be there.

But they are not, and we are not.

Time moves on - and we have too. We stay in touch almost daily, but we are a little spread out geographically and it make it hard to all be together.  ...and when we were all in one place, we didn't do a great job documenting that togetherness, other than our memories.

In those, let's say 25 years, I can think of (and find) only three pictures where all five of us exist.  ...and one of those was taken this last weekend.  Well actually, multiple were taken this weekend (thank digital phone cameras!).

But when you hang out as often as we did, I don't believe any of us thought we needed to capture it on film. We were in our 20's and would always have 'this'.

Oh, but yes, all five of us were together for almost three days this last weekend. It was divine.  Of course, we had stories of the past, but we talked about the now - even mundane things, like we would have any other time.  The gathering was a non-event event.  In certain ways, that is how it should be. Just five folks and their significant others hanging - eating and drinking.

Of course, the weekend allegedly revolved around my birthday, but I'm hoping that was just an excuse (though I did get 9/10 of a cake out of the deal - don't ask) since who needs the attention.  The cake yes, but not the attention.

It is hard to believe that it's been since 2002 since we've all been together.  Morty and I have seen Jon once or twice since, but the others have not.  It's even been eight years since just the boys got together - and yes, no pictures.  WTF.

Since none of us is Ponce de Leon, we're not getting any younger.  It is time to make these visits count - and I think we did.

I don't mean to give Jon a big(ger) head, or to demean the rest of the group, but the vibe is slightly different when all of us are together - like a jigsaw puzzle.  Sure if you had four-fifths of that puzzle you could guess what the image would be, but it is not the same as being complete.  ...and no, I'm not going all Jerry McGuire on you.

Anyways, I'm hoping we will make more of an effort.  It is unfair to ask Jon to always come to Ohio, but the other four live here (three in Columbus).  I think it would be nice to meet elsewhere, but that involves more eating out and less just 'hang time'.  We'll work it out.  I just have to believe.

As for those three pictures - eh, just for shits and giggles, I'll post them here. 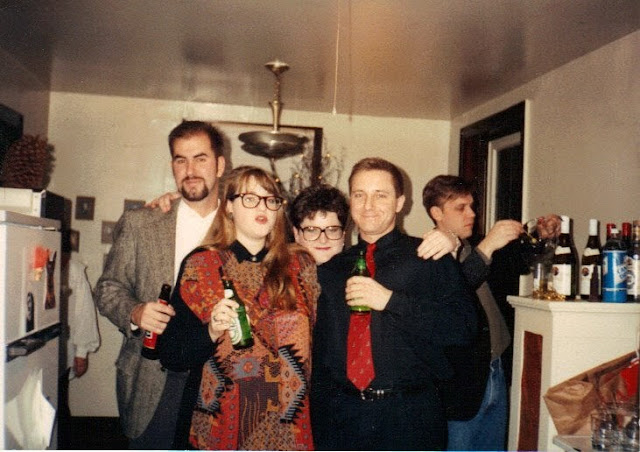 1988.  Holiday Party at Jon's apartment.  For the life of me, I couldn't tell you who took this picture. 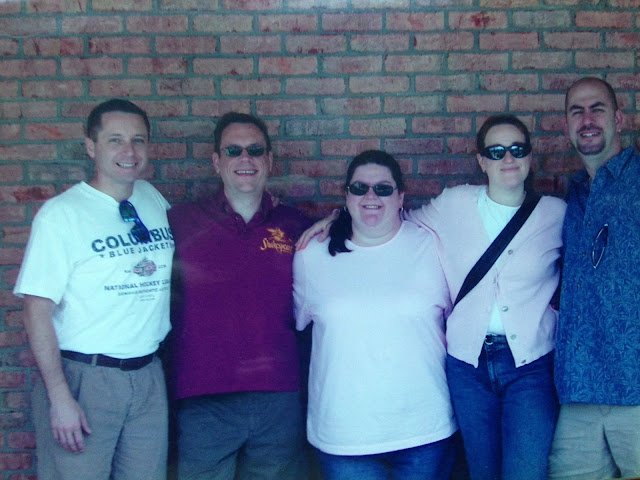 2002.  Sorry, it is a picture of a picture.  I am sure somewhere I have the original digital image, but lord knows where.

Meredith had coloured her hair outside at Morty's the day before.  1,000 of worms died when the colour was rinsed out. Seriously, whatever was in the product brought worms up from the depths of the earth.  Poor poor worms.

Ugh - I was a bit heavier back in 2002 and using a faux tropical shirt to cover it up - unsuccessfully I might add. 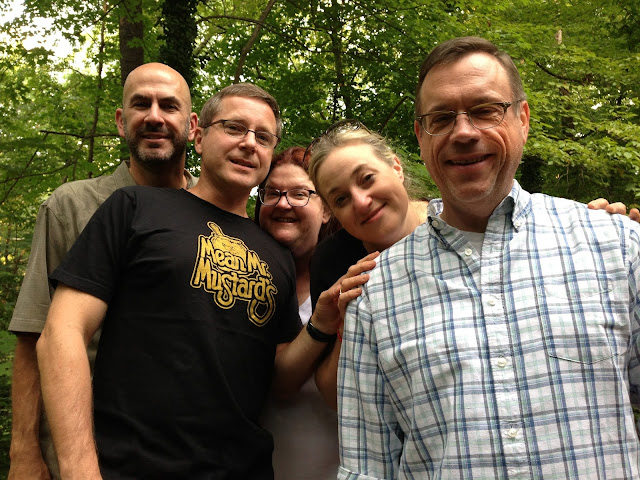 710 took 11 pictures.  11 !!!!  Not his fault, but none were perfect.  Eyes closed on one or more of us, or bad angles.  This might be the best of the bunch unless someone knows ye olde photsohppe.

It's frustrating (in a good way) that Jon (the man is still wearing a J Crew shirt he bought 20 yrs ago!) and Morty look so much the same. Age has been kinder to them than to me - though oddly, I like how I look now than I did back in 2002.   ..and oy, that Frankenstein monster head I had in 1988.  WTF!

Of course the girls look fine too.  Maybe aging isn't such a bad thing.

Hopefully we don't have to wait another decade for the next group picture.


Song by: the Pat Metheny Group
Posted by Blobby at 12:09 AM

I wish I had pictures of myself when I was younger, but I never really liked being in front of the camera. I always prefer to be the one taking the pictures.

Aging is a good thing. I like being middle aged now that I'm used to it.

age has been kind to ALL of you. the guy in the "mean mr. mustard" shirt is a hottie!

I'm sooooo getting a neck lift.

This post makes me weepy. Sure was great to have everyone here, but the post-morty hit me hard.

Y'all should recreate that 1988 picture next time you're together... :)

what a splendid entry and photos!