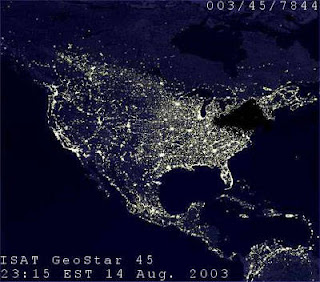 Ten years and one day.  My how time flies.

That is when we had the great big power outage of 2003 that took much of the northeast portion of the United States.

Oddly enough, I could have told you the month and date, but not the year.  But I do remember it like it was yesterday.

Since my blog was only a few months old back then, I barely touched on it. Two posts here and here.  ...and when I says 'barely', I'm being generous.

I was actually working off-site with some consultants and had gotten them back to their hotel so I could get to a dentist appointment.

Since you know back then I loved the dentist so much (yes, sarcasm), I was tres grateful when the power went out just as I was getting out of the chair.  Ugh, can you imagine a dental drill dying while embedded in your enamel?   (shudder.)

Now mind you, it was about 16:00 and light out, so I thought little of it. But of course, at the time, I didn't know - nor did most - how wide spread the problem was. 710 was working from home and until we hooked up a temporary power supply did we know the extent of the damage.

The hospital went into full disaster mode. All those years we did disaster planning with tornadoes, plane crashes and anthrax, and what brought us to our knees was a downed power line.

While I navigated part it from home, it was decided I would stay there and come in at 03:00 to give others a break. The drive to work was weird - as no one was to be on the road, but it is amazing how far a hospital badge will get you with the police.

The hospital smelled. No way around that. Especially the operating rooms - like really really bad locker rooms. While they are usually kept cold, now the walls were sweating with humidity - there'd be no operations for a few days since after things came up, everything needed to sterilized...again.

Though every hardware in town was a beneficiary of the blackout.  The hospital went out and bought every fan they could get their hands on - and extension cords to keep the current patients cool.

My staff had a very very difficult time tracking patients without the benefit of a computerized system. Forget the billing aspect - just the coming and going of patients and when, and where they were was an issue we wouldn't get correct for days, as we had to electronically make every admission, discharge and room change after the fact.

Almost two days of no power. We had jugs of water, so we were ok, but the showers were cold even for summer. At least the cats were hydrated.

We ended up keeping emergency provisions for a year or two after the fact, but you know how that goes - it just trails off and you don't think it will happen again.

But at least there were no zombies.

Song by:  Lisa Marie Presley  (oh yes, you read that correctly)
Posted by Blobby at 12:19 AM

Zombies will have made it fun!!

Soooo... you turned 40 and the lights went out. What the hell is going to happen now that you turned 50??

I always remember the blackout because we were in the Forest Motel in Stratford Ontario. as it turned out, we spent the 10th anniversary in the same place.

I remember exactly where I was that night