One and One Make Five 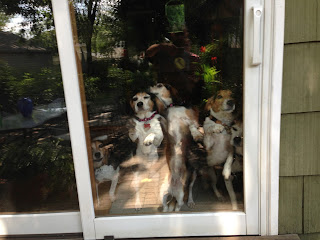 But I also knew that on Saturday of last week that two other beagles (girls!!!!) would be joining the pack.

Emma and Lizzie joined the brood and as expected, everyone got along famously.

If getting three beags to pose is impossible, five is out of the question.  NEVER. GOING. TO. HAPPEN.

With all the activity, Petey was still new to the group. The other four have spent lots of time together. But every the gracious host - Morty treated Petey with special care.  And by that I mean giving him food and picking him up for hugs. 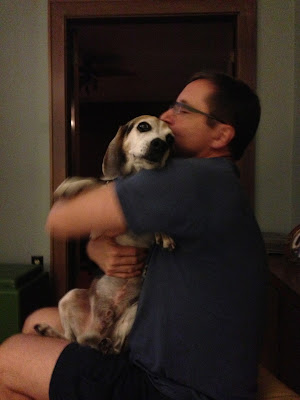 Pete might look a little distressed, but I can tell you he didn't mind at all and gave Morty kisses.  He likes everyone.  He LOVES Mort.

...which had nothing to do (honest) the bacon I'm sure that got snuck to him.

Petey was also the recipient of two half bagels and part of a piece of pizza.  These were not given, but stolen.

Anyways - more of the five beagles. 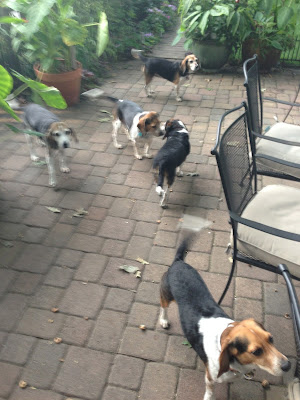 Petey is on the far left. Then (I think I'm right) Emma, Logan, Lizzie and Skeeter. 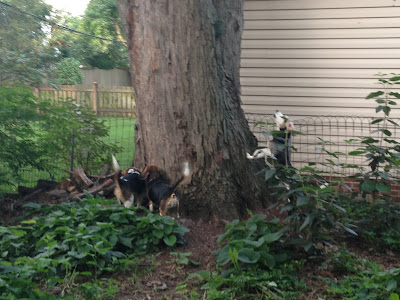 Not the entire bunch trying to get a squirrel.  My fave part of this is Morty coming out because he heard a 'new' bark.  Yes, it was Petey (right side of the tree).   One must need earplugs for a fox hunt.  Lord. 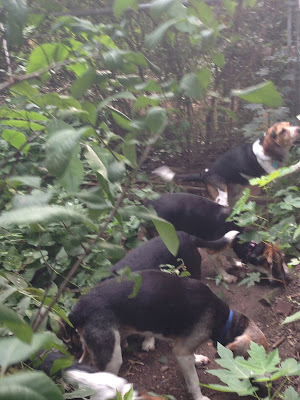 Getting sub-standard treats from the lady behind Morty. "FIVE?" she said. ...yet she had five treats.

But my fave was coming back to pick up 710 - and all the dogs were in the house. It was killing me with cuteness.  Only 9 seconds in length, yet 3 seconds too long for Vine.

Lovely, laughter-inducing cuteness, but where's the PSB song? Or am I being typically dense?

dogs is best in packs,after all!