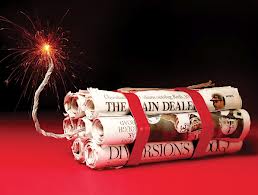 While I haven't actually purchased an e-book on my iPad, many folks I know read on those, or Kindle and to a lesser extend, the Nook.  I'm not sure anyone has ever purchased a Sony e-reader.

When I travel, I am one of the few still reading an actual book.  I can't seems to break from the feeling of one in my hand, or turning the page.  I know I will eventually go electronic (probably), just like when I thought I'd still be purchasing CDs and .mp3s.

But as for print, I'm really talking about the newspaper.  The actual, physical newspaper.

As of yesterday, the Cleveland Plain Dealer started down the road to obselesence. At least the public would have you believe.  I'm not sure the paper know what it is doing.

For months there has been the big hoo-ha about trimming the paper, going to three days per week, if they publish at all.  All the while they've had it on-line, on the shittiest of websites - cleveland.com.

But not, here is their wickedly ingenious idea of cutting costs: cutting delivery to three four days per week.

Oh - they will still print the paper seven days per week, just not deliver it to you.  You have to go to a Starbucks or 7-11 to get it, if you want it.

IF you want it.  I don't. And certainly not enough to go out of my way to pick up a copy.

You saw the strikethrough on "three" a few lines up, because, the PD has already back-tracked from three and increased it to four days per week.  Mind you, they still let 50 people go from the paper - not that I'm sure they'll be missed.

The paper has become a joke with non-articles, and badly written at that.  I can easily breeze through the entire paper in 15 minutes (tops), which includes reading the comics and obits.  I suppose I could increase that to 24 minutes if I read all the high-school standings of every single sport they publish, but I don't.

My favourite is the "Reader's Representative".  A number of big papers have these, I would say the most notable being in the New York Times. At least there they will take their own paper, writers and editors out to the woodshed, publicly, for things they should not have reported on or in ways in which it was done.

With the PD, the representative almost always tries to justify their stories - what, how and why.  He doesn't seem to get that his column should be called the "Paper's Representative".  His editor needs and editor.

But back to the delivery.  For the shut-ins who can't go out to get a paper and probably can't read it on-line due to lack of computer or iPad, let alone the ability to use such a device, they're fucked. However, on the days the paper is delivered, they'll include the comics from the days when it's not delivered.

Is paying the paperboy that much of a burden that the paper can't handle it?

As it is, I'm pretty sure we pay the paperboy.  Man.  In a car.  Not a kid on a bike. We get billed for his services - or in with our paper bill, so where is the cost savings - other than those 50 folks who got canned?

Allegedly, the cleveland.com site has been upgraded to read more like a paper. The previous version was like trying to find a needle in a haystack.  So poorly done.

I think I'd be better having the paper just shut down.  I find nothing of value in it other than the obits.

By the time anything is published in there (or most things), I've read them on line hours or days beforehand.

710 has signed up for the on-line edition, but I have not.

Mind you, I heard the door open at 06:00, but before I could scream downstairs, he was out the door looking in the drive for the paper what was not to be delivered.  He was reading the morning news on his iPad when I finally made it to the kitchen.

Our paper subscription will get us access on three devices. ooooooh.

This is just slow, painful decay. You know how the story will end, just not when.

I'm all for the newspaper industry. I think it is important - or could be. But printing the important news isn't where the money is made. That is in the advertising.  Publishing the actual stories seem to be secondary anymore - and maybe tertiary for a mid to small town news organization.  The PD is not the Washington Post or the New York Times.

And if one thinks that PD is one of those few our there that are failing, I just need to point you to a story from the weekend where the NYT has sold the Boston Globe.  Of course at first look a $70MM price tag seems decent, until you realize that the NYT purchased the Globe for $1.1BB 20 years ago.

But everyone knows, as soon as you drive it off the lot, it starts to depreciate.


*Later breaking news - Jeff Bezos of amazon.com bought the Washington Post for $250MM.  Soon to be available only on Kindle.   (i kid?)   It still beats the Koch brothers from purchasing major papers.

Email ThisBlogThis!Share to TwitterShare to FacebookShare to Pinterest
Labels: Newspaper

"the philadelphia inquirer" is also one I can read in 15-20 minutes tops during the week, 2 hours on sundays. and yes, I read some of the articles online 3-4 days before they make it to the print edition.

but we have 7 days very reliable delivery from a neighbor in his car at 5a in all kinds of weather.

there are no electronic readers in this house, just real paper (news and books).

discouraging news about "the boston globe" and "the washington post" indeed.

Paper is dead as far as I'm concerned. The local fish wrap is run by a pro-business right winger who panders to one side of the aisle, and those idiots couldn't find my apartment in a thirty-unit complex the last time I subscribed to it.

I know... call us old-fashioned.

This is so sad. I grew up in a family that received two papers a day - a morning regional and an afternoon local. i have always had a daily paper delivered no matter where I've lived (I'm 52). I do get a lot of news from the Internet, radio (NPR), and television but there's nothing like going through the paper in the morning with a cup of coffee.

I dislike my hands getting covered with newsprint ink anyhow...