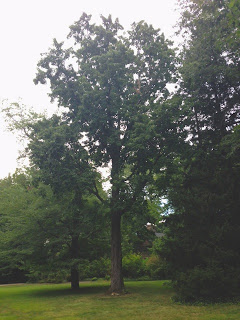 I would love to put money into our house, as opposed to always dealing with "improvements" from which we seemingly get no benefit. ....like trenching around the house.  Ugh. Necessary, but hardly aesthetically pleasing (I mean, unless there was a sewage back-up in the basement).

We currently have a flora situation. Trees.  Dead, dying or rotting trees.  Blast.

The majority of them are on a hillside, a few already dead - all Ash trees infected with the Emerald Ash Borer.  One is a large tree and only partially dying, but leaning and towards the residence.

Oddly, this is not what had me call a few arborists.

We have a 70-80' Maple in the front yard that is looking disturbingly bad.  From the title image, you'd think - 'hey, that doesn't look so bad'.

It's fully leafed, there are no dead or dying branches associated with the tree - so what's the big deal?

Well, you'd think it was this 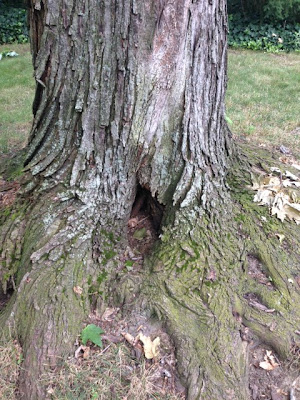 This little anomaly has been around for years - though maybe not as bad. But an arborist a few years ago didn't seem that worried about it all.  But then, that was a few years ago.

In the last year, this has appeared 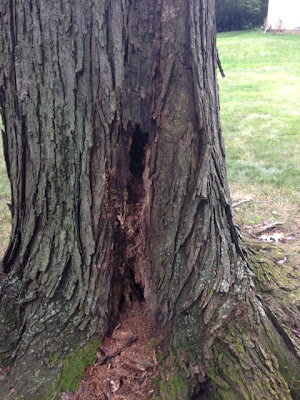 Nice gash.  One of my first thoughts was that maybe it is an Ent vagina.

The first aborist who gave an estimate was very very knowledgeable.  They all might have been, but he offered rationale and was able to look at the roots and secondary roots to tell me things none of the other did.

He alluded to that the tree might still have a few years left, but that at least 50% of the base is hollow

The guy stuck his hand into that gash and said he hoped not to pull out a raccoon.  I told him we've been here eight years and we don't have raccoons.  He just looked at me and said, "oh yes you do - that is what did this to the tree.  You've got critters".

I think he meant the tree and not me.

Now, I'd say a decade ago we got a similarly sized tree (and a maple) taken down at our old house.  Is it possible that costs for this same service has gone up 35% in that amount of time?  Yes - I did the math.

I'm still waiting for two other companies to provide their written estimates, but even with the one I got, it includes stump grinding, but it leaves all the chips and shreds there - they don't haul it away.  WTF!

This maple has the ability to come down on the house as well and could do damage. However, that means insurance could pick up the cost for removal and for kitchen renovation!  With my luck, they'd deny the claim because they'd know that we knew the tree was at risk, voiding our submission.

Well, we'll see what the other companies give us as a price quote.  Expect to see a post of (manly?) guys taking the tree down in the next month or so.

um, could you post pics of the removal (manly) crews? That's my only suggestion at this point.

I hate removing trees, but we're in the same situation. I've got an old apple and some birches that are at the end of their lives. Fortunately they're not threatening the house. The apple has lost two or three large branches in the past couple of years, the latest last week. They crash down under the weight of the fruit. So then I have to go out with the chainsaw and cut 'em up. At least it's some free firewood. One day I'm gonna have to actually deal with them. Ugh!

We had a huge tree job estimated by four companies. I told each one the previous estimate and each one undercut the competition. Final cost: less than one third the original quote.

I believe the, "It's always something." quote is from Roseanne Roseannadanna.

Actually the huge gash at the base is exactly what I saw back at my parents a long time ago. I had always wondered what did that. Now it's the city that takes care of that.

Just rent a chainsaw and do it yourself. :)

I grew up on a street with mighty elms, which made a sort of gothic roof of shade for the cup de sac. I miss these trees.