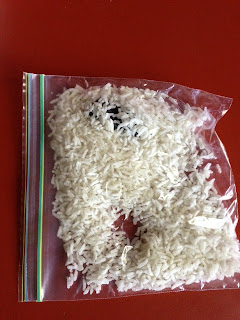 Well, the most used present (besides my iPod) I've ever received has gone kaput.

Somewhere in that bag of rice is my fitbit.

You might remember that 710 got it for me during the holidays just 8-9 months ago.

With the clip on, the scale and the website, I was tracking steps, flights climbed, distance, weight, BMI and fat percentage.  Sometimes my sleep cycle.

It was a handy little device that seemed so well made and seemingly impenetrable to the elements.....and perhaps one swimming pool.

When I was in Maine, I actually forgot I had it on. That stands to reason, as I almost always had it on since I got it, and this was the first time a pool was involved.  I had walked the beach and was past 12,500 steps for the day and it was only 14:00.

Only upon getting out and toweling off did I notice the fitbit was still clipped to my waist.  FUDGE (but I didn't say "fudge).

Immediately all looked good.  All displays seemed just fine so I went about my business of laying around, getting a drink before heading to the room.

Only later getting ready for dinner did I notice that the display was totally black. No life in it whatsoever.  Fudge again.

There was little I could do up in Maine. I supposed I could have gone and bought some rice there, but that seemed, I dunno, lame.

Here we are weeks later.  Now and again, the display will appear....it will track a few steps....and then die....again.  Sometimes it will come on if you attempt to charge.  Most of the time, not.

I had nothing to lose at this point - some rice, a sammich baggie and a fitbit.  So far, Dr. Frodric Frunkenshtein couldn't get this alive.

I'm debating paying to replace it. I think the patterns and my behaviour are set because of the first 8-9 months, but there isn't that validation of obsessively checking it two dozen times per day.  Or is that just me?

The thing is, with the fitbit (and other devices), if friends of yours have them, you can follow each other's progress. So Patrick must be thrilled that he dumped following me weeks ago. I get that my activity levels intimidated him, but ouch - it hurts to be rejected.

With some therapy, I'll get over it.

Some people on-line say that fitbit might replace it at a lesser charge or even free (though they were deceptive on how it broke).  I might tell the truth and see what they offer, if anything.

If nothing else, the scale still works. (yay??).  It still uploads my weight to my on-line profile.

I think it's official that I can no longer say 'tonage' when talking about my body.  I get that I have a poor body image, but it's not my weight.

My goal weight was 180 so, I think I can stop obsessing over weight loss, not that I will, but I should.

Email ThisBlogThis!Share to TwitterShare to FacebookShare to Pinterest
Labels: Exercise

Congrats on getting your weight down!

Indeed good news about the weight loss
I propose we get rid of all or tech-stuff, and we'd all weigh a lot less.

congrats on the weight loss. You look fine to me! ;)