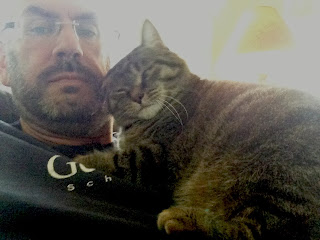 I would like to write about something other than my head, but I've been quite limited in activities as of late.  Dog walks and vet appointments are my big outings.

I don't really see myself as an expert on Syria or MLK.  There are others who have better insight into that stuff than little ole me.

Just a quick update and I'm out.

I made it 12 hours with out any shooting pains.....and even then I only had two.

This makes me cautiously optimistic that I'm on the healing track.  It doesn't do anything for my sense of well-being that we know the cause of this, but first things first.  I've been wildly unproductive with bouts of inability to do much of anything.

As you can see, Sophie has been my caregiver during the day. She has not held that nasty vet appointment against me at all.  Actually, I could barely get her off my chest at all yesterday.

I won't say this is the last update, but hopefully it will be the last for a while.....and if things progress in a positive way, why yak about it.  If I end up in major pain again, you'll hear about it, because misery loves company.

In last year's JAMA, Cat therapy bested Rx in a double blind study for the treatment of pain.

I do hope Sophie can nurse you back to wholesomeness. I think you've got there the best of all possible carers. Wishing both of you every success in your strivings.

in spite of everything, sophie loves her daddy. and I second dr. spo; my cats make me feel better when I am ill.

And here we thought being a music lover you were going to discuss Miley Cirus and her major talent. ;)

Sophie must know you're feeling horrible, and is using her kitteh powers to help.