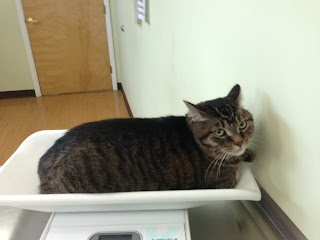 She had her annual check up yesterday.  Granted, she's not an outdoor cat and doesn't really get into things, so "annual" might be a false statement.  It may have been years since she's seen the vet.

As a kitten she was there for a few colds and a mandatory declawing  - the vet's insistence, not ours.

But after Tovah had passed, there was no exchange of kitty sneezes and such. Now that we have Petey, we felt better about having her checked and making sure all was right with her world.

And one lady was NOT happy to go to the vet.


That was just the first 'meow' in the car.  There were many many more to come.  And  a lot of hissing just getting her into the carrier.  710 can do this going forward.  I don't like this part of being a dad.

Sophie really was a champ, once we got her to get out of the carrier (read: dumping it on it's side so she had no choice to slide out).

They offered her string cheese on a tongue depressor just to nibble on, but she wasn't having any of that shit. I figured I would pay for this later.

She got her shots, they checked her poo, eyes, teeth, ears and paws.  All good.  Overall she is healthy but.....

As you see, she got weighed.  The poor girl is, well, Rubenesque.

Today she starts on a diet.  We currently free feed her - just put food in her bowl once a day, sometimes she eats, sometimes no.  She never clears a bowl.  Ever.

But we will limiting her to 230 calories per day - or 115 twice per day.  It will take months for her to lose weight, but the doc says that is how it should be with cats.

So far I'm not catching hell for taking her to the vet - I assumed she'd punish me. However, with limiting her food, who knows what the reaction will be.

I bet she tries to eat my face at night.

poor sophie - such indignities she must suffer! and then on top of that, to be told she is FAT!

she will pee in your shoes for sure!

Don't sweat it. My Ricky lived to be a few weeks shy of 15 and he was a bowling ball with legs.

Whenever I return from the vet, after having taken my dynamic duo, they keep looking at me with that "How COULD you!" look - threatening to never trust me again. But it's soon forgotten - at least I THINK and hope it is.

How much does your face weigh?

You can set the amount, and the time, and multiple times. Totally worth it.