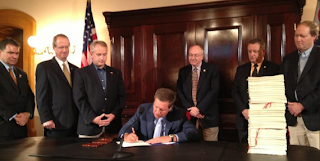 Years ago (I think), I wrote a Shopping with Blobby post that had to do with balls.  Men's balls.

I don't remember much about it other than Birdie commenting:  "I don't know how you guys walk around with those things."

But on the other hand, government  - state or federal - doesn't give a crap about my twig and berries, even if I sexually assault someone with it.  Women, on the other hand, are at the mercy of white male elected officials when it comes to their dirty pillows and baby makers.

While living in Ohio is challenging at best, I have never been so embarrassed to be from this state before in my life.

Last Sunday, our douche of a governor signed into law, the most restrictive abortion criteria in the United States.  And he got it through with no open debate, no bill, no discussion - it was just slipped into the state budget.  Signed. Done.

Yes, that's right, John Kasich got changes in abortion law via the state budget - and all through budget cuts.  Not promises of funding if A. B. or C.  happen.  Just cuts coupled with additional penalties if any family planning center works outside of parameters set forth in said budget.

Planned Parenthood - or any other family planning clinic - will lose additional funding if they don't read from a script regarding fetal development during any appointment regarding pregnancy termination.  Planned Parenthood (or family planning centers) must have transfer agreements with NON-public hospitals in case of an emergency.  13 counties in Ohio do not have non-public hospitals - so they're kind of up a creek. Ultrasounds must be done and shown to patients development of their fetus and told if there is a heartbeat. And then there are the limitations for Rape Crisis centers too.

Oh, it also redefines life - saying when it begins.

Nary a woman was pictured with the governor at the signing - which is totally unsurprising.  I mean, it was a Sunday, so they were all gettin' supper ready for their men whiles they were barrrrfoot and pregnant in the kitchen where dey belong.   {clearly you all know I'm making fun of the Ohio GOP with that  - right?}

I doubt few, if any, women working on the budget supported this - if they were told at all - but the image of men deciding what is right for a woman's body and health is astounding.  ....and deadly accurate.

Honestly, I'm just dumbfounded over this. I shouldn't be, as you see how things are going in Texas, but fuck - it seems so middle-ages.  And the method of going around laws - actual lawmaking processes - is incredible.

It is the gall of Kasich and Rick Perry (and more, as we all know) that are so underhanded and just mean about it.

Women of the world - they HATE you.  There is no other way to say it or sugar-coat it.   They don't even try to hide this fact any more. You can try to say "it's for the good of the unborn child", but it's not.

These are the men (!) who fight sex education in schools - along with condom distribution. They try to limit the day after pill or access for women under a certain age to see a doctor.  They'd rather you get HPV than have access to the vaccine. They try to cut or cancel Medicaid and WIC programs to single mothers (who now can't have the option of termination), and won't let qualified folks adopt the children who go into the system should you choose to give up the child you're forced to have.

The budget angle is new(er) territory and I have to believe a lot of states more conservative of Ohio are looking at us as the test balloon on what they can do - and not just with women's health.

You can say what you want about the outrage of Edward Snowden and the NSA - but this, to me, is worse than spying as the choice they make, and how they get around implementing them is one fuck of a slippery slope.  What programs will be next that we won't know about until after the fact?

If the Right thinks Obamacare and the non-existent 'death panels' are invasive, wait till they start dictating other health issues to people. At least with Obamacare, the conservatives know there won't be those things - they are just using them for scare tactics.  What Kasich has done is very very very real - except that most people - women included - don't know they've taken place.  Yet.

They are in for a rude rude awakening during their next clinic visit.

Now I'm a white male, so I feel pretty safe that those state senators will keep out of my health care choices.  No one is going to tell me to get castrated for family planning purposes, but if you have a set of ovaries - you're fucked.......but with fewer options after that screwing.

Tactics like this will only cease when they do affect the middle class to rich white male.  Then all hell will break loose.

Pulitzer Prize winner, Connie Schultz, does a nice job giving her thoughts on this issue.  For full disclosure, she was a Cleveland Plain Dealer columnist, but is also the wife of Democratic U.S. Senator Sherrod Brown.

All I can say is watch out you in other states.  This is the new model.  And watch out Kasich.  The majority of voters in Ohio don't agree with your tactic - and I'm not sure if you're counting on the women's vote for 2014, but here is hoping you just fucking lost it.

it is all very depressing.

Unfortunately, as much as white men are responsible for this, so are women. All these men have wives (at least publicly) and many have daughters, all came from mothers (supposedly) and many have sisters and they still do this. Why? Because too many women (mostly republican) associate reproductive rights and sex education with ABORTION. They don't understand the difference AND all because these people are so afraid that their children will be corrupted by others (because they are such lousy parents that they can't raise their children with morel strength and an educated mind).

Men may dominate the office but the women in their lives and almost all elected GOP women are to blame just as much.

I am so damn sick and tired of white men looking up my vagina and telling me what I can/cannot do with it! IT'S BELONGS TO ME, DAMMIT! AND I'LL DO WHATEVER I DAMN WELL PLEASE WITH IT!

(my boyfriends are exempt from this rant)

Late to the party, but for those who don't know, that quote of mine came from Seinfeld in the "shrinkage" episode.

I'm so disheartened at the backward progress (is that a phrase?) we are making in terms of women's rights. This comes in concert with rabid antigay rhetoric that is straight from the 40s and 50s. Did I take the wrong turn somewhere? How is this possible in this day and age?

Late to the party, but for those who don't know, that quote of mine came from Seinfeld in the "shrinkage" episode.

I'm so disheartened at the backward progress (is that a phrase?) we are making in terms of women's rights. This comes in concert with rabid antigay rhetoric that is straight from the 40s and 50s. Did I take the wrong turn somewhere? How is this possible in this day and age?

Next thing you know, women's suffrage will be out the window...