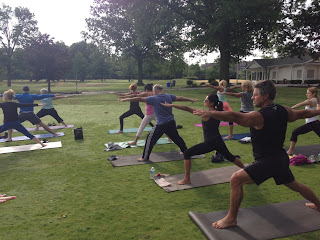 There are just times it's so hard to be me!

Someone I am friendly with (notice I did not say "friends") was teaching her first yoga class since becoming a certified instructor.

I have a few issues with this on multiple levels, but I'll try to get them into coherent thought (um...good luck with that Blobby!)

First off - the class was to be a donation-based event.  You donate what you choose with proceeds going to a Cystic Fibrosis charity.

Far be it from me to stiff the kids who can't get oxygen into their lungs, but I agreed to go.

Secondly - I've been to plenty of new instructor classes.  Most are painfully bad.  They don't have the experience, or even perhaps the ability, to lead a class in ways of a meaningful flow.

That said, a few weeks ago, we did have a new male instructor. I'm guessing he was all of 5'3" - or as David called him, a Hobbit.  And while his feet seemed hairy enough, they weren't all that large, which is typical for men-folk of the Shire.

And he did insist on adjusting me. But where as most people will adjust your down dog from the side, he did it from behind. Afterwards, I said to David it was like almost being violated at Oz - and not the Emerald City Oz.

But other than that, he was a good instructor for one of, if not his, first class. He was tough.  He pushed us.  He didn't care that much about his playlist - even if he had "Hey Jack Kerouak" by 10,000 Maniacs on it.

Thirdly - being friendly (not friends) with this other person, would make me have to lie about the quality of her class.  And I knew this well before it ever began.  Critique would not come easy, nor would acceptance of constructive criticism - hence the knowing I would be fibbing.

Secretly, I prayed for rain - but since g-d abandoned me eons ago, he was not taking my phone calls.  I can't says I blame him.

The class was to be out in the showiness of nature. Truth be told, I've never done an outdoor class, though David and I have plans to attend one (or two or three).  But in my mind, it wasn't all that well thought out.  You really need to be in Operations for these kinds of things.

We did it on a converted golf course - that is converted from course to a park, but on a green.  At 08:00.  The best case scenario would be dewy. The other two were rain during the class or before, which just meant mud. I opted to take my shitty old mat with me.

She didn't have a station for donation intake.  She barely had a contingency plan for rain. And even though you know all in your class doesn't allow you to start / finish when you please.  You have a time, you advertised for it - you need to commit to that.

But weeks ahead, she was more worried about the music playlist than well, the actual one-hour session.   ....and the music choices were not good.  I mean, if I have to fucking hear that ukulele version of "Somewhere Over the Rainbow" once more in my life, I'll throw myself off a cliff.   Ruckiry (not Jon's boss), somewhere between the planning and practice, she dropped the song.  Phew.

Still, the class didn't start on time; then we had to hold in a pose for an inordinate amount of time when the music cut off and she went to fix it.

Now my thing is - I don't really need music for yoga.  It's nice, but unnecessary.  And outdoors - it's really unnecessary.  And for your first class, you should have your shit together on the other stuff before worrying about music.  This isn't Spin.

So with music, the birds, the wind and this person actually doing the poses instead of talking folks through them - it was impossible to hear most anything she said.

The instructions, overall, were marginal at best. She catered to the newbies - which I get - on easy poses, but then would completely throw something in there that no one but one other person could possibly do.

I distracted myself from part of the class just to take a few pics - for this post and I send some to her.

As it turns out, I didn't have to fib too much, as I was never asked what I thought.  I said something benign like "good job", helped carry stuff to her car, and then I left.

And........AND...........David ditched me for a supposed job he had out of town.  A likely story, but one I pat him on the back for getting out of the thing entirely.  We had been working up a "family event" scenario, but I ended up the cheese standing alone.

one of my reservations of getting back into yoga is my teacher in MI was so good I fear nobody else could live up to her talent and my expectations of a 'good' teacher.