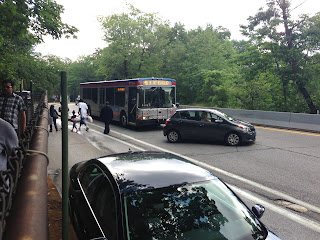 So, one morning last week, I was coming down the driveway to take Petey on his morning constitutional. A car pulls up with two older women (70s and 80s, easily), both with heavy German accents.

They were attempting to locate an estate sale that was easily 6-7 miles from where they were - and in the opposite direction from which they arrived on our street.

Being that the east side of Cleveland is not built on a grid, it took a few minutes to explain where they needed to go and how to get there.  I watched them take off, missing (or ignoring) my first directional turn and then they were gone.

As we made our way through the 'hood, and letting Mr. Pete do his morning bidness, with me following behind, bag in on hand.  As we were closer to our house, there was a horrific crashing noise.

Now, you've all heard the tales of cars coming into our yard, or colliding on the hill or turning upside down on wet slick days.  But with some of them, you'd hear crunching noises.  I've never heard a "crash" noise like this.

I went to investigate.  Petey accompanied.

If you can view the picture.....the lane on the left is a dedicated lane that is closest to our house.  The other two lanes are for merging traffic, but they have the opportunity to maintain those two lanes, making it a three lane / one-way street.

I approached from behind the bus (the pic was taken after I walked down the hill).  Clearly, this car cut right in front of the public transportation vehicle.  The car shoved another car (not in the picture) into the right hand wall.   The car in the foreground was not part of the accident, but witnessed it, though her car was so close to the wall, I'm not sure how she didn't scrape.

Since that car was closest to me, I axed the woman if she was alright. She was, just calling the police, which as you know, in our 'hood is now easy task.  No one wants to respond, as we straddle to different jurisdictions.

The bus mashed in their side, but didn't seem to set off the airbags. The driver window broken out, the door smashed - and nary a scratch on the bus.

Who should get out of the car to walk around?  The old lady who stopped to axe me directions.

How 10 minutes after she left me that she ended up back on the road she had just come down is beyond me.  The lady who witnessed the accident said, "it looked like she was trying to do a U turn and turn around"..........on a three lane one-way street.  Oy.

Not that I had any liability to this, but I opted just to get out of Dodge.

The following day, at Pride, as nice young woman asked me how to get to the Terminal Tower.  I pointed her the way and 710 goes - "you probably sent her to her death.....".

those 2 ladies should NOT be out driving; they are a danger to themselves and others.

Those ladies should be using the bus instead of driving, and hopefully not that same bus that was involved in that accident.

And people wonder why I'm all for mandatory driver's road tests being required every other year...