Since I am on vacation, and could just as (not) easily write witty posts about Maine, drinking and friends - I really am happy to coast on the blog thingy and just post whatever, where I don't have to think that much.  Or at all.

So, I took four minutes (tops) to participate in BosGuy's quiz on what Superhero am I. 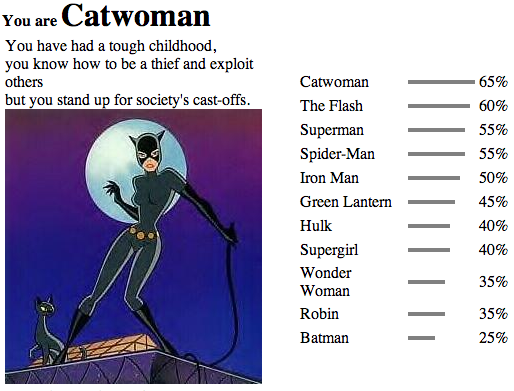 As if I don't have enough self-esteem and body image issues - now I have this with which to deal.

First off, I did NOT have a tough childhood, I don't exploit others, I don't have long hair and all of the such - and told the quiz as much - TWICE.

Apparently the quiz was not listening.  Both times I came up as Catwoman.

I don't know if Selina Kyle stole things or not - as I never read comics.  When I answered in the affirmative that I have, I'm thinking back to five finger discount items at Lawsons when I was a junior high lad in need of Skittles or Now N Laters, but low on cash.

Sure, I grew up watching Batman - with Julie Newmar, Lee Meriwether and Ertha Kitt.  Then of course, Michelle Pfeiffer.

I didn't see - nor cared to - Oscar winner (coughcoughcough) Halle Barry in that role. Anne Hathaway didn't suck in her stint (ooooh, Mike is turning red at just the mention of her name - but more on him later).

So, now there is me......as Catwoman.  But without the skintight suit, or the back-end percentage deal of the box office receipts.

This would be something else to bring up to my shrink, if I had one.

Feel free to take your own quiz here.

Song by: Shakespear's Sister
Posted by Blobby at 12:31 AM

Ha ha! Well, if you're not going to don a cat-suit the least you can do is to crack a whip - and I bet you've already got one. Photo please!

I am 80% spiderman; thanks but no, his suit looks claustrophobic and I have issues with that already.

I thought I was going to be Wonder Woman or Super Girl. They were second and third. Apparently I'm Iron Man.

I'm superman. You got Cat Woman for the whip and leather! ;p

Iron Man here. You seem to be alone in hating this quiz!

Well frak! Iron Man. I guess that's what you get for liking technology and alcohol.

Then again, that *is* better than Catwoman at least. ;-)