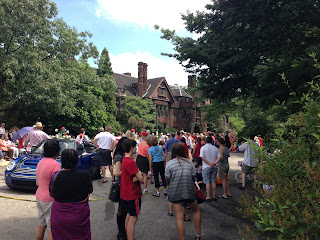 So we did the parade yesterday - at least Petey and myself.  710 was too tired from an all-night work project.

The cavalcade is only around the neighborhood - Petey's normal one-mile path that we'd do on our normal walk - but this has bikes, scooters, big wheels, strollers and such.

The route ends at the assisted-living facility that is on our street.  There the Declaration of Independence (in part) is read - and then the weakest-ass singing you've ever heard for any number of patriotic songs.  Not Lee Greenwood patriotic, but songs that is older than that.

To the "anonymous" commentor yesterday - yes, Petey was ho-hum about the parade - and of course he'd rather been the emcee of the cookout, not that he was invited. All the Hebrew Nationals would be gone with his wily ways and begging brown eyes.

For the parade, he kept up, but didn't interact with most of the people or pooches.  Oh sure, he made time for his girlfriend, Esmé. 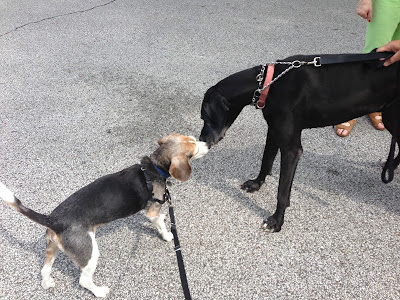 Since the rain held off, I went with my idea of a dish - that kind of worked, kind of didn't.

I can't say if anyone liked it, but they ate it all.  Or if they didn't eat it, they discreetly tossed it in the trash. Either way, I didn't have to bring anything home. 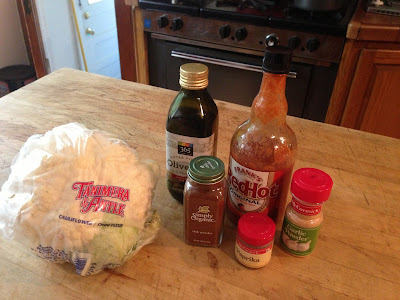 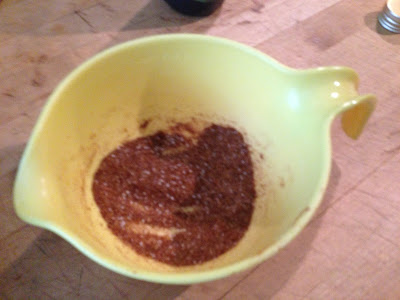 Toss spice mixture over cauliflower and mix well, making sure all the cauliflower is coated in the spices. 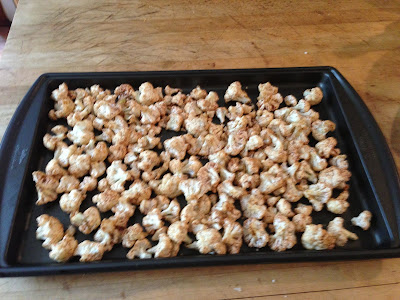 Spread cauliflower out on a rimmed baking sheet a roast for 20 minutes.

Toss with wing sauce and serve with your favorite blue cheese dressing for dipping. 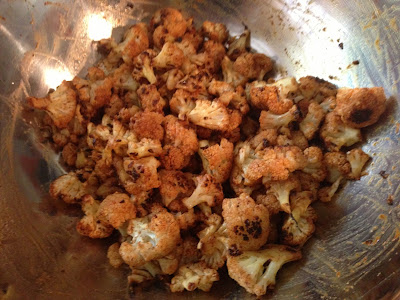 I know this doesn't look that appetizing, but again, I'm not a food photographer.  They tasted ok, but they seem to be a more of a right out of the oven to table kind of thing.  Getting them two doors down and in the heat and humidity didn't do wonders.

Again, the platter on which I brought it was clean about 30 minutes later.

It's a good vegetarian option for a cookout - I think.  And anything with hot sauce can't be all that bad, right?

Hope your holiday was good.

frank's red hot - you put that shit on everything! (or so the commercial goes)

esme is a lovely lass; petey has good taste!

I may have to try the cauliflower. It seems... interesting.