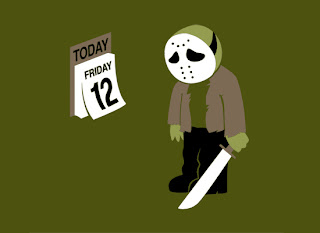 I just really really like this image.  I've been waiting months to use it.

Oddly enough, we were all sitting around drinking two nights ago and Rebecca didn't know that Jason Voorhees had a last name.

Her rationale was that Cher, Madonna and Prince don't have last names.   ...which they totally do.

Today is our last full day in Maine.   Boooooo.

We are hoping to make it count, not that we haven't tried to make the other ones memorable.

Actually, we've all been good about doing stuff together and on our own when something doesn't appeal to others. No one is tied to doing everything all the time - we'd kill each other.

Weather has been hot and cold; dry and wet.  And yet it hasn't mattered one little bit.  710 and I have had dinners and lunches with either everyone or partials. I've been at a gay bar three times this week - which is three times more than I've been at one in the last 7-8 years combined.

There's been great beach time, great walking time - even though I went swimming with my FitBit and might have ruined it beyond repair.  I've done all the word and now am not getting any of the credit.

Still - all things must end, and so this vacation.  But we have all of today and part of tomorrow.

No doubt there will be follow-up posts and pictures accordingly - just to keep the magic alive.